This January, Neil Collins, Ryan Hebert, Tommy Oldre and I opened up a vertical of our top white wines, from our first vintage in 1997 to the newly released 2005.  We wanted to see where the wines were in their evolution, as well as to see how our style had changed over the years.  We found a remarkably consistent sense of place that came through in all the wines, and some surprising results on some of the oldest wines.

Rhone whites (at least, Rhone whites based on Roussanne and Marsanne) are renowned for aging well, and for going through many distinct stages.  A wine that can seem dead and gone, oxidized and dark, can revive later, lighten in color, and re-emphasize the mineral components of the wines.  Even experts have marveled at the varied life of these Rhone whites.  Robert Parker comments, "They are compelling when first released, then become nearly undrinkable only to re-emerge in the future, but one is never quite sure at what age that will happen. It is one of the mysteries of wine, but it is reassuring to know there are still things the so-called experts cannot explain."

Before this vertical tasting, we had not experienced dramatic life cycles on the white wines.  The wines (particularly the Roussanne-based wines) had aged gracefully, and gone through minor variations of flavor and balance over this period, but we hadn't seen a wine that truly showed as old (oxidized or tired) clean itself back up.  Perhaps we just hadn't waited long enough.

The 1997 Tablas Blanc, from four-year-old vines and predominantly Marsanne (45% Marsanne, 30% Viognier, 25% Roussanne) had tasted very tired the last time we'd tried it, with a sherry-like character and relatively thin body.  Honestly, none of us thought it would recover.  In January, it had come through this stage, and showed a clean, herby nose, with some rhubarb and peach pit.  In the mouth, it showed butterscotch and pear, medium body, with a long finish.  I don't know how much of this is out there, but whatever there is should be a pleasant surprise to anyone who's kept it.

The 1998 Tablas Blanc (50% Roussanne, 25% Marsanne, 25% Viognier) was the product of a cooler vintage than 1997, and for years stood as Francois Perrin's favorite Tablas Creek white. But, at this tasting, it was our least favorite.  It smelled of aged sherry.  The mouth was a little better, with some caramel vying with the mushroom and burnt sugar flavors, but still not a lot of fun.  From the evidence of the 1997, we hope that it will clean up again, but there's nothing to be gained by opening a bottle now.

At first sniff, the 1999 Blanc seemed destined to share the fate of the 1998.  The nose was a mixture of rubbing alcohol, hazelnut, and mint, interesting but not particularly enticing.  In the mouth, however, it showed excellent freshness, with lemony acids and a little sweet oak on the finish.  Tommy commented that he could taste the Vermentino and Grenache Blanc (the label lists the composition as 32% Roussanne, 30% Viognier, 28% Marsanne, 7% Grenache Blanc and 3% Rolle).  What's more, the wine opened up dramatically with a little time in the glass, and the rubbing alcohol blew off, replaced by honey and sweet spice.  If you're opening one now, give it a chance to breathe.

The three oldest vintages provided interesting insight into the aging potential of Rhone whites, but all probably peaked at least a few years ago.  Starting with the 2000, we moved into wines that were meant to age, from older vines and with increasing percentages of Roussanne.  The 2000 Clos Blanc (45% Roussanne, 19% Viognier, 19% Marsanne, and 17% Grenache Blanc) is soft, warm, and inviting, like a comfortable pair of slippers.  The flavors of honey and dried pineapple meld into soft texture, with a lingering impression of sweetness (though the wine is fully dry).  There is just enough acidity to bring out the mineral component.  We're very happy that we still have some of this left. It's gorgeous now, and should drink well for another couple of years at least.

The 2001 Esprit de Beaucastel Blanc (which won "Top 100 Wine of the Year" awards from both Wine Enthusiast and Wine & Spirits) showed our efforts to retain a bit more acidity after the soft, voluptuous Clos Blanc. In this frost-reduced vintage, we stopped the malolactic on a portion of the Grenache Blanc and Viognier (the blend is 44% Roussanne, 22% Viognier, 18% Grenache Blanc, and 16% Marsanne). The nose showed brightly, with floral and green pear predominant.  The mouth was vibrant, sweet and round in the mouth, with great lemony acids on the very long finish.  The wine is mature, but still lively, and should drink well for at least a few more years.

The jump in concentration between 2001 and 2002 was as noteworthy in our whites as it was when we did our vertical tasting of the reds last year.  Driven by our increasingly rigorous declassification of certain lots into the Côtes de Tablas, the wine became much more reminiscent of Beaucastel: longer, richer, and more powerful.  The 2002 Esprit de Beaucastel Blanc (70% Roussanne, 25% Grenache Blanc, 5% Viognier) showed explosive spice, mint and honey on the nose, with lots of power in the mouth and a little mintiness that lifts up the finish.  This is still broadening out into its considerable structure, and should drink well for 5 more years at least.  This vintage, too, we held some back of, and I know that, after tasting it, I went and bought some more for my own cellar.

The 2003 Esprit de Beaucastel Blanc followed closely the plan of the successful 2002 (68% Roussanne, 27% Grenache Blanc, 5% Viognier).  The Grenache Blanc component is a bit more noticeable than in previous vintages, and contributes green apple notes to the nose to complement the Roussanne-driven honey.  In the mouth, a sweet grain character interweaves with honey and spice, but the mineral comes out dominant on the finish.  Our principal impression on this wine is that it is still quite young, and while drinking well now should improve over the next few years and drink well for 6-8 more.

By 2004, we had gotten a little of our Picpoul Blanc into production, and found that its white flower, mineral, and lemon notes proved to be a terrific complement to the Roussanne base of the wine.  We also began to pick our grapes to emphasize the acidity a bit more, confident that the Roussanne's natural richness would be able to handle it.  The resulting 2004 Esprit de Beaucastel Blanc (65% Roussanne, 30% Grenache Blanc, 5% Picpoul Blanc) shows remarkably clearly the influence of that Picpoul.  The nose is fresh and bright, with an apple cider and ocean air character that is unlike any of the previous wines.  The mouth is beautifully structured, with mineral throughout and persistent acids that linger on the finish.  The wine, though, is more intellectually satisfying than friendly at the moment, and we'd recommend that anyone with the patience lay it down for a couple of years to let the Roussanne round out to fill its mineral structure.

Finally, the 2005 Esprit de Beaucastel Blanc, from a vintage that we believe will go down as perhaps the best ever in Paso Robles, is both elegant and exuberant.  The nose is fresh, with anise, young honey, sweet pear, and wheat.  The mouth is long, with balanced acids, flavors of meringue, honey, loam, and a little bubblegum.  The texture is both rich and mineral, with a persistent saline character that freshens the long finish.  It will certainly round out with time, but is so appealing now that I think it will be hard for people to wait.

The Greening of the Vineyard

Our rain is coming, later than we'd expected it, but no less welcome.  This past weekend's storm dumped about 2 inches on the vineyard, and although we're still behind our typical winter's pace, the cover crops are vibrantly green, the creeks are starting to fill, and the Salinas River even made an above-ground appearance.  We're in a brief sunny period between two storm systems, and I took advantage to take a series of photos of the greening vineyard.  Click on the images for larger shots. 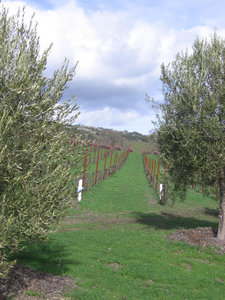 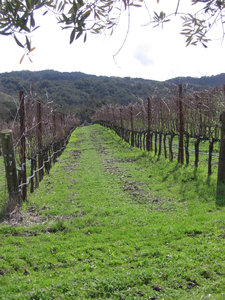 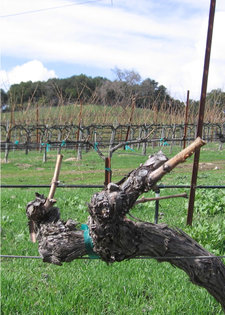 And finally, one bigger shot, about which I love how it gives the feel of the day... sun, but not warm; winter, but not raining, when the world outside smells freshly-made: 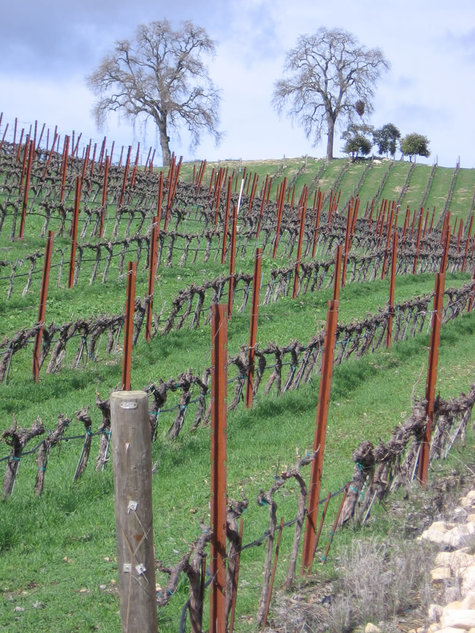