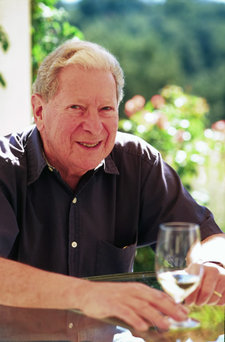 On April 18th, my dad will turn 80.  He doesn't look it, or act it, and I think that a big piece of what's kept him young has been his lack of sentimentality and his restlessness to figure out what the next interesting development would be.  His career in the wine industry has spanned more than 50 years, and he has made contributions as a retailer, an importer, a wholesaler, and now, with Tablas Creek, as a vintner.  I'm continually amazed by the various impacts he's had on how Americans buy, drink, and think about wine.  At the same time, he's a private person, who is not comfortable promoting himself, and has remained relatively unknown to much of the American wine-buying public.

A quick thumbnail of his career for those of you who may not be aware:

A few years ago, Saveur and The Wine Enthusiast did retrospective pieces on his career, in conjunction with the 50th anniversary of his first wine buying trip to France.  This year, I'm looking forward to articles in the San Francisco Chronicle, Wines & Vines, and the San Luis Obispo Tribune.  This has been one of my goals for the year: to get people to know a little more about my dad, and to get a somewhat broader understanding of the path that he laid down that others have followed: importers like Neil Empson, Kermit Lynch and Robert Kacher; wine-focused distributors around the country; specialty retail shops (and producers) that sell a significant portion of their production through futures offerings; producers of Rhone varietals in the Central Coast and particularly Paso Robles; and wine lovers who value wines of place.  It is this last contribution which I think is furthest-reaching: his consistent search for wines that reflect the place in which they are produced, made by winemakers whose winemaking respects that place.  I have written earlier about how important we believe estate bottling is at Tablas Creek, but this has been an important (perhaps the most important) marker of quality for my dad for more than 50 years.

I didn't grow up in a world of wine dominated by negociants who made wines from lots of regions, from grapes (or wines) bought and blended.  And I have my dad, in part, to thank for that.

You know you've arrived when... the Crate & Barrel catalog shows a bottle of Tablas Creek wine!

My father-in-law Jim Dunn used some sharp eyes to spot a bottle of Tablas Creek Cotes de Tablas Blanc in this month's Crate & Barrel "Living" catalog.  Does this mean we've made it to the big time? 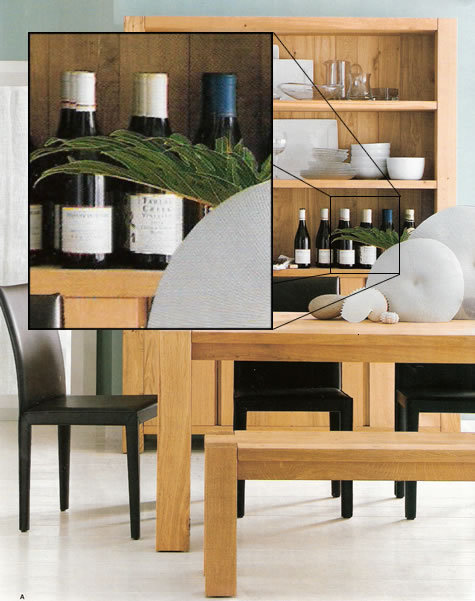 At this time of year, when it comes to organic and sustainable vineyards, it is clear who puts their money where their mouth is.  With the winter rain that we get in the Central Coast, organically farmed vineyards turn a vibrant green, whether through a planted cover crop or through the actions of the natural seeds and grasses of the landcape.  The green stretches uninterrupted through the vineyard, between the rows and among the vines.

Vineyards using herbicides have neat brown dirt underneath the rows of vines.  It frustrates me to drive by vineyards at this time of year and see that nearly all (including some whose owners emphasize their sustainable practices) show such clear evidence that, at least in weed control, sustainable seems to mean "we don't use any more chemicals than we need to".

At other times of year, it's not as clear.  While the vines are growing (say, April through November) you need to keep weeds from interfering with the free passage of wind and light among the ripening clusters.  So, if you're organic, you weed mechanically or by hand.  It's not as quick or as easy (or as cheap) as spraying Round-Up, but it's essential.  If you look at a well-maintained vineyard in August, it will not have weeds growing among the vines, whether it's organic or not.  But, in the winter, a vineyard's practices become clear.

I worry that sustainable is losing its meaning, as producers realize that it is an unenforced term.  No one within the TTB or the USDA verifies any specifics with a "sustainable" designation, and while many producers are making an honest effort to reduce the impact of their vineyard on the environment, this designation is entirely self-defined.

Of course, it's probably better that people are at least thinking about sustainability, and are not using more chemicals than they really need... it has to be better than people spraying chemicals indiscriminately.  And, fine wine vineyards are relatively light in the footprint that they leave on the environment.  They don't need that much water, or that many chemicals, or really any fertilizer.  But, there remains a big difference between producers who talk about sustainability and those who practice organic (or biodynamic) farming.

This time of year, it's clear... just look for the unnatural rows of brown dirt.

Posted at 11:10 AM in Sustainability Matters, Vineyard | Permalink | Comments (0)