This week, we're seeing the first signs of veraison in the vineyard.  This means the clock is ticking... we figure on an average of about 45 days between the end of veraison and the beginning of harvest.

(Veraison is the French term for the point at which berries begin to turn color, marking the plant's change of focus from berry growth to berry ripening.  There is no comparable word in English, so the French term is used.  It's pronounced vuh-rey-zhun.) 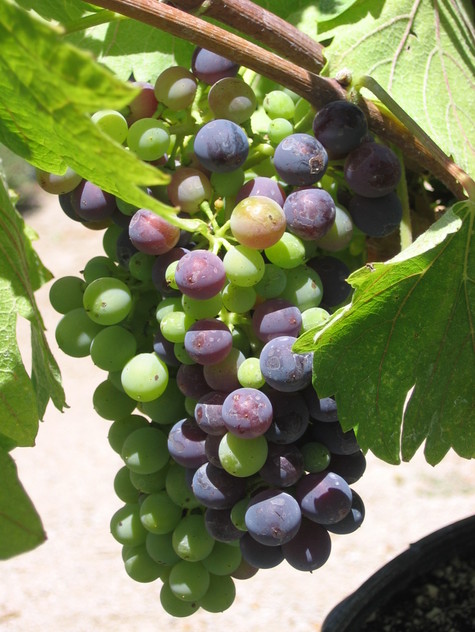 As usual, we're seeing Syrah start veraison first, although we've seen signs of it in all our red varietals this week.  The grape cluster above is one of the Syrah mother vines that we have in pots outside our tasting room.

Many people don't realize that white grapes go through veraison too; they don't turn color as dramatically as the reds do, but they shift subtly from plant-green (the same color as the stems and shoots) to a more yellow- or gold-green.  Veraison also marks a dramatic acceleration in the accumulation of sugars in the grapes.  Before this point in the summer, grapes are growing, accumulating mass in both skins and pulp.  After this, the grapes don't grow any larger, but their sugar content climbs and their acid content declines.  In fact, between veraison and harvest, the grapes lose a little mass.  Late in the summer, most grapevines are under stress, and water supplies are low, and when you pick, they've typically lost between 5% and 10% of their mass from their peak in mid-summer.

Another veraison photo (of Mourvedre) is below.  Note that veraison is less advanced in the later-ripening Mourvedre grape. 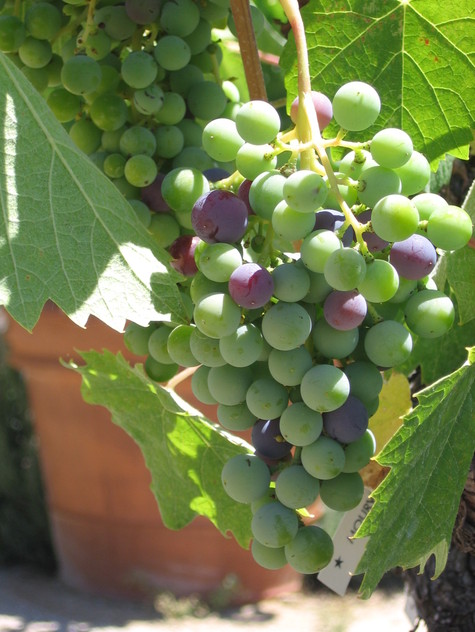 Every now and then, you come across an event that is so perfectly suited to what you'd like to communicate about your wines that it seems impossible that someone else should have come up with the idea.  The Outstanding in the Field dinner series is this sort of event. 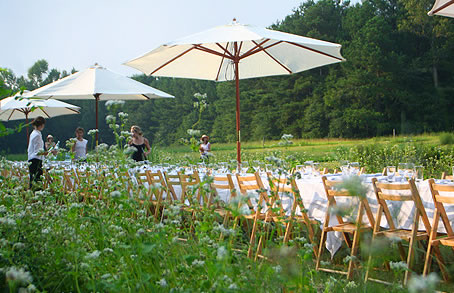 Outstanding in the Field pairs chefs who focus on local, organic ingredients with the farms and farmers who produce these raw materials.  Then, they bring in wineries who also share these commitments.   So far, this is admirable but not unusual.  Then, they take it one step further, by holding the dinners in the fields where the produce is grown, and serving everything at one long table, family style, where the attendees, chefs, farmers and vintners eat together (most of them on their own plates, which frequent attendees bring from home and reuse at each dinner).

These dinners are held all over the country (the upcoming dinner schedule lists events in such diverse places as Half Moon Bay, Nantucket, Chicago, New York City and Hollywood) and we have even hosted one here at Tablas Creek back in 2004.

A few months back, we were approached to partner with a dinner that is scheduled for this Sunday (July 22nd) in Carpinteria, California.  The location is Coleman Farms, while the chef is Richard Mead of Sage and Sage on the Coast Restaurants of Newport Beach.  The menu has not quite been finalized (Chef Mead is waiting to see what is particularly enticing from the farm this weekend) but it will be a 6-course meal, each paired with a different Tablas Creek wine, and is slated to include dishes like local white bass crusted with citrus zest and steamed with Coleman Farms vegetables (paired with the 2005 Esprit de Beaucastel Blanc), braised grass-fed beef shortribs (paired with the 2004 Esprit de Beaucastel) and an orchard peach tart, paired with our 2004 Vin de Paille.

These dinners are a wonderful experience, and provide a wonderful camaraderie as you sit with farmers, chefs, and winemakers all committed to the production of food and wines that show a sense of place.  If you are not already, join their mailing list, save your pennies (the dinners aren't cheap, but neither is the experience) and get ready to feel yourself reconnect with your food.  Outstanding indeed!

Corks and Screwcaps: Not an open and shut case

I came back from a tasting today (the always excellent Central Coast Wine Classic) having again had my third discussion in a week with a consumer who was confused as to why we bottle some of our wines in Stelvin screwcaps, and others in cork.  She asked if it was because the wines in screwcap were less expensive than those in cork (they weren't).  We do our best to match up the wine with the closure that best allows it to age and evolve gracefully, and the answer is not the same for all wines, any more than a one-size-fits all prescription for winemaking would be.  Tell a winemaker that he must choose either 100% barrels or 100% stainless steel tanks for everything in his cellar, and you'd have a revolt.  And yet most accept such a prescription for sealing their wines without question. 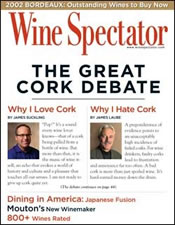 I guess I can see how consumers would find this difficult to understand; most of the coverage of alternative closures is terribly reductive, either taking the position that anyone who stuffs a piece of tree bark into a bottle of wine deserves the contamination they're likely to get, or in talking in mushy language about the romance of opening a cork-finished bottle of wine.  Probably the most public debate of this sort was played out in the March 15, 2005 issue of the Wine Spectator, where James Laube and James Suckling shared cover space with dueling articles entitled "Why I Hate Cork" and "Why I Love Cork".

It is undeniable that  a percentage of all natural corks are tainted by TCA, a chlorine compound that makes the cork (and any wine in contact with it) smell and taste musty.  Industry estimates range from 3% to as high as 10%.  Even at 3%, this is a terribly large number of bottles that are ruined each year.  For a winery of our size (our production of about 16,000 cases per year) this would mean that we'd send out over 5000 bottles that would be compromised.  If we were lucky, the consumer would recognize that this bottle was corky and would request a replacement.  If we're unlucky, the consumer just decides that he must not like Tablas Creek (or at least that particular bottling).  It's easy to see why so many winemakers are passionate advocates of alternative closures.

At Tablas Creek, we have bottled samples of the same wines, finished in both cork and screwcap, since 2002.  We have tracked their evolution to get some of our own impressions of what the various impacts of both options are.  When we taste the wines, we do it blind, and ask ourselves (and anyone who joins us for these tastings) to describe what we taste.  Matt Kramer included his experience in such a tasting in a thoughtful piece in the Wine Spectator in August 2004.

We (and everyone who's joined us) describe consistent differences between the cork-finished and screwcapped wines, and have noted these differences as early as 3 months after bottling.  Wines bottled under screwcaps taste fresher, higher in acid, younger, tighter, and more mineral.  Wines bottled under cork taste softer, sweeter, richer, more open, and more evolved.  Which is better is not a simple question, and it depends on what we want out of the wine.  For an aromatic white, or for our Rose, we like the brightness and freshness that the screwcap provides, and feel that the screwcap will have the additional benefit of keeping these wines (which are typically meant to be enjoyed young) tasting youthful longer.  But those same characteristics do not benefit most of our reds, and they do not benefit our Roussanne-based whites, all of which we want to develop that softness and sweetness that time brings to wines meant to age.

There is logic to this.  Corks come from the bark of cork oaks, and have a flavor (if untainted) similar to gentle oak from a barrel.  In addition, they provide a measure of oxygen exchange with the wine (even if they provide a perfect seal between the wine and the outside air, corks contain oxygen in their pores and share that with the wine).  Screwcaps provide a better seal, but don't provide either the flavor exchange or the oxygen exchange that a cork does. (New models of screwcap allow a tiny oxygen exchange with the air outside, but are new enough that we haven't felt comfortable experimenting yet.)

So, next time you hear a winery declare that they've switched entirely to screwcap, or a writer rhapsodize the ceremony of opening a cork-finished bottle, I hope you resist the suggestion that things are so simple.  Rarely in life do either of two options, each with passionate advocates, have a monopoly on the truth.  The debate between cork advocates and screwcap advocates is no different.