We had a nice foggy morning earlier this week, and I made it out to take some photos.  This is one of the only times of year where it's occasionally foggy here; usually the fog is kept back by the Santa Lucia Mountains.  With the grapes off the vines, there's no harm in the fog, and it was a good excuse to get on top of the vineyard and look around.  This first shot is looking north, down through a row of Vermentino: 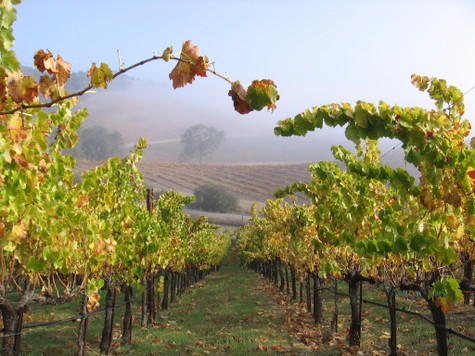 The second shot is a good one of our newly-sprouting cover crop: 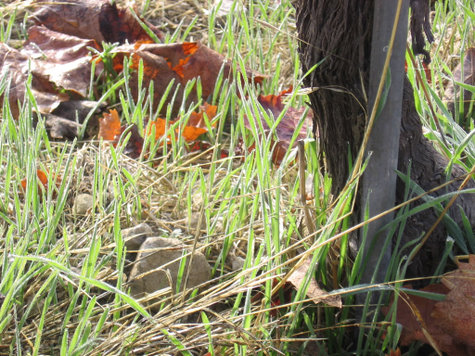 And then a few different views of vines through the fog: 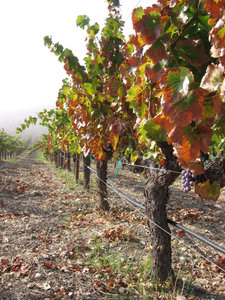 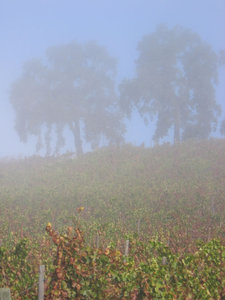 And finally, one last shot that I love for the feel of the day, caught in that season between fall and winter: both warm and cold, wet and dry: 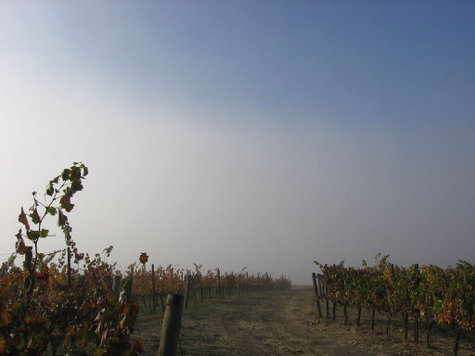 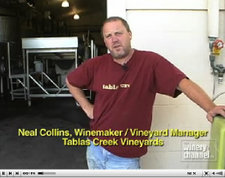 If you haven't checked out winerychannel.tv yet, you should.  It's online television, dedicated to the world of wine.  Like many members of the new media, they're fans of what's going on in the Central Coast, and we welcomed them up here a month or so back for a discussion of the 2007 harvest.  Winemaker Neil Collins spent an afternoon with their crew walking them through what was going on in the cellar and talking about what 2007 was like for us.  Check it out (click on "The Source" Episode 26: Harvest Report when you get there).

The TTB's Reevaluation of its AVA Approval Process: a Retreat from the "Common Good"?

[Editor's Note: with the publication in late November of the TTB's proposed new rules for AVA approval, the questions under debate have been clarified.  I have posted an updated analysis of the new rules, as well as a discussion of some of the responses of local and regional organizations, in the December 6th blog post The TTB's new AVA Rules: A Well-Meaning Step in the Wrong Direction.]

Recently, the TTB (Tax and Trade Bureau), which among other responsibilities oversees the applications for new AVAs (American Viticultural Areas) announced that they would be suspending consideration of any AVA petitions which either nest inside of an existing AVA or could conflict with an existing brand name.  This has effectively shut down the consideration of all new AVA petitions within the United States, including the 11 petitions to subdivide the 600,000 acres within the Paso Robles AVA (map below). 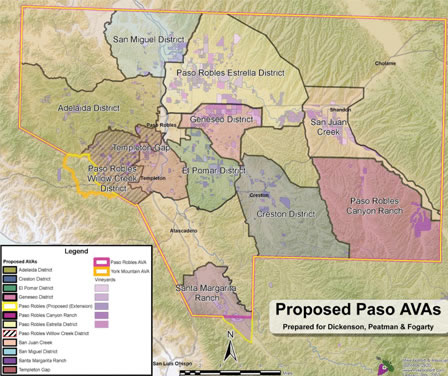 I was asked recently by a writer visiting the area what I thought of the TTB's decision.  I thought that the question deserved a little more thorough consideration, and began this post.  Shortly thereafter, a terrific article by Corie Brown was published in the Los Angeles Times addressing the issue.  I wanted to take a little more time to incorporate the new information she unearthed and think about this issue from a larger perspective.  My feeling is that this provides a great opportunity to think about what the purpose is of the TTB's regulation of viticultural areas, and to address why they might be looking at changing their regulations now.

In essence, viticultural areas were created to provide specificity of origin when existing place names (cities, counties, or states) were either too large or too imprecise.  To use the Paso Robles AVA as an example (as I'm most familiar with its specifics), the AVA includes portions of three towns: Atascadero, Templeton, and Paso Robles itself.  These all share characteristics of climate and geography that make them distinctive from other areas outside the AVA.  Yet, within the AVA there is still enormous variation in rainfall (from 7 inches to 45 inches, depending on where you are), temperature (as much as 10 degrees on any given day), elevation (from 600 to 2200 feet), topography (high plateau to the far east, alluvial riverbeds in the center, and foothills to the west) and soils (over 40 soil types have been identified within the appellation).

The goal of creating AVAs (within the Paso Robles region and elsewhere) is to help consumers understand what characteristics a wine will inherit from where its grapes are grown.  In order to make these AVAs meaningful, the TTB requires that any brand incorporating an AVA name use grapes grown in that AVA.  When the TTB began recognizing AVAs in 1986, and enforcing the directive that wineries that incorporated a place name into their brand name had to use grapes from that place in their bottlings, they identified that they had created a problem for some existing brands.  These brands were grandfathered in and are allowed to make wines from any California AVA, as long as the wine's AVA is clearly marked on the label.  This seems a reasonable compromise to the competing goals of protecting the meaningfulness of geographic identifiers and avoiding harm to brands created before the rules were made.

However, the rules are different for brands created since 1986.  The regulations expressly prohibit any winery from using an approved AVA as their brand name unless they're using fruit from that AVA.  This is well known within the industry, and is an important consideration for any winery in choosing its name.  If, for example, you're going to call yourself Paso Robles Winery, you know that this will preclude you from ever making a "Central Coast" or a "California" (or even a "Napa") AVA wine.  And, this is important even if you're using a place name that has not yet been made an AVA (such as Calistoga).

In the Los Angeles Times article, Corie Brown interviews the proprietors of Calistoga Cellars, who are in a fight with the proposers of a "Calistoga" AVA.  They created the brand in 1999, but make wines under the Napa Valley AVA, incorporating some fruit from within the proposed Calistoga AVA but buying the majority of their fruit from elsewhere in Napa Valley.  They filed a letter of objection to the Calistoga AVA proposal, claiming that it would harm their business to have to find new sources of fruit.  I found the most fascinating insight into their thought process from the following quote from owner Roger Louer: "I assumed Calistoga Cellars would be grandfathered just as those wineries were in 1986".

It seems incredible that the federal government should be in the business of protecting speculative business owners who begin a project with the expectation of an exemption from the rules on the books, yet this is what has happened.  The TTB has suspended consideration of any new AVA that "would affect an established brand".

Every exception to the rules requiring geographical specificity undercuts the foundations of American AVAs.  It is alarming to me that the TTB seems to be indicating that it is planning a retreat from the rules that it has made for itself and for its wineries to follow.  What's more, it is doing so while several proposals developed under the old rules are in mid-approval.  In a letter explaining their decision, they state that what they're going to do is "take a balanced approach to its administration".  This sounds alarmingly to me like what is going on elsewhere in the federal government, where agencies are being directed to support the interests of individual businesses over their statutory responsibility to promote the common good.

What do all of you think of this?  Am I overreacting? 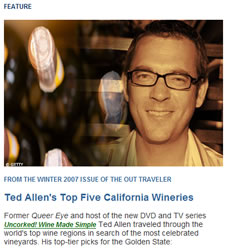 The world of blogs is amazing. I have a Google alert set up to let me know when a blog entry about Tablas Creek is posted (if you haven't checked out this service, it's well worth doing; click the link above).  I got an alert yesterday that a blog aggregator (a sort of robot blog that searches for content on other Web sites and blogs on a particular topic and posts it automatically) had included a mention of Tablas Creek in a story about Ted Allen's favorite California wineries.  I tracked it back (through another aggregator) to the original story in Out Traveler magazine (also pictured to the right).

There are real ethical issues with blog aggregators (which often slurp content and republish it with limited or no attribution) but that's a story for another time.  In this case, I was just happy that it gave me a chance to be alerted to a story that I hadn't heard about.

For those of you who don't know Ted Allen, he's the food and wine expert best known from Bravo's Queer Eye for the Straight Guy series, and he's also the host of the PBS wine education series Uncorked (which featured Tablas Creek last year).  To be picked as one of his five top California wineries is a pretty nice bit of recognition.