Photo of the Day: Basking Vulture

One of the pleasures of driving out to Tablas Creek on winter mornings is arriving to see the vulture display. On these chilly but sunny days, vultures pick a high point where they can spread out their wings and soak up the sun, often ending up silhouetted against a deep blue sky. One of their favorite spots is at the top of what we call Mount Mourvedre, the hill behind our winery building.

Like many creatures that are essentially without predators, the vultures let you get fairly close before they flap heavily into the air and glide away. I managed to get within twenty yards of a trio of them this morning, and my favorite photo is the one below, with a vulture observing me amid the pattern of wooden end posts and newly pruned Grenache Blanc vines. 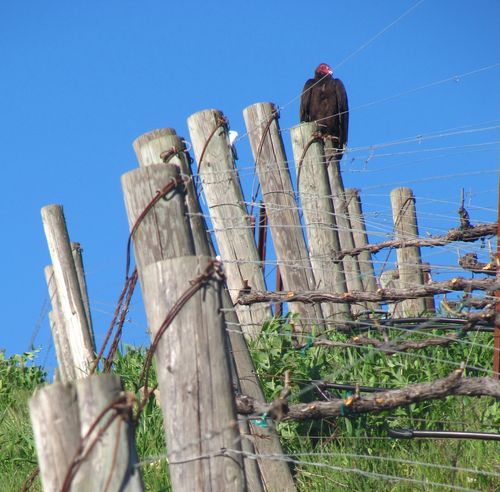 If you want to see the vulture display, just make plans to come out some chilly morning and look up, above the limestone walls that line our parking area, past the solar panels and all the way up the hillside of Mourvedre vines.  You can't miss them.

It’s Syrah month here in Paso Robles.  At the beginning of the year, the Paso Robles Wine Country Alliance launched a “varietal of the month” program that cycles through the major grapes grown here, and are supporting it with a grower blog, a winemaker interview and a new installment of the Paso Wine Man video series:

In celebration, we decided to open up every vintage of varietal Syrah we’ve made, going back to our first-ever varietal red wine: the 2002 Syrah that we made three barrels of for our new wine club back when three barrels was plenty to make it around to all our club members.  Since then, we’ve made a Syrah each year other than 2009 and 2011, when spring frosts cut our Syrah crop sufficiently that we sacrificed the varietal Syrah to protect our blends.

One other element of interest was tracking how the three-year stretch (2005-2007) when we added 10% Grenache to our varietal Syrah changed the wines’ expression.  For all our commitment to blending, at this vantage point at least the group generally preferred the wines we made pure. Our tasting notes:

A few final conclusions. One, that Paso Robles really is a spectacular place for Syrah.  We found a combination of the grape’s classic savory, bacony, blackberry notes with a creamy minerality and acidity that everyone around the table attributed to our limestone soils.  That set the wines apart from many Syrahs made elsewhere in California, and from the great Syrahs that come from Hermitage and Cote Rotie, none of which have limestone and all of which show a lower-acid, lusher profile.  The wines were instead reminiscent of Cornas, the Northern Rhone’s sole limestone-rich red appellation, perhaps a bit less polished than its better-known neighbors just to the north, but with an energy and vibrancy that we all were proud of.

Two, we generally agreed that we preferred the purer expression the Syrah character in the wines that were 100% Syrah to the more Southern Rhone character of the three vintages where we added 10% Grenache, though those wines were appealing in a different way, with more garrigue and mid-palate texture, and had their proponents as well.  The tasting was a good reminder that relatively small percentages make a significantly difference in the finished expression.

Finally, our favorites were 2004 and 2008 in large part because of how each, in its own way, spoke powerfully of the Syrah grape in all its glory: meaty and minerally and fruity and creamy: the classic flavors that my wife Meghan called “butter in a butcher shop” when she first tasted it out of foudre. They also finish with substantial tannins but don’t come across as blocky or heavy.  I’m expecting a similar evolution with our 2010 Syrah that is going to wine club members next month.  We’re all in for a treat.

Tasting the wines in the spring 2013 VINsider Club shipment

Every six months, we send out a six-bottle shipment of wines to the members of our VINsider Wine Club.  While the fall shipment showcases our signature wines, and includes our Esprit and our Esprit Blanc, the spring shipment is more eclectic, highlighted by the Panoplie, our elite wine made in the image of Beaucastel's iconic Hommage à Jacques Perrin.  Beyond that we include wines we're particularly excited about.  This year, we chose the Cotes de Tablas Blanc from the intense, low-yielding 2011 vintage, the 2012 vintage of our Mourvedre-based estate rosé Dianthus [see here for an explanation of the new name], the 2011 Patelin de Tablas that has been winning fans with its freshness and great value, and two varietal reds from the elegant, mineral-laced 2010 vintage: Grenache and Syrah.

Late this week I opened the wines in the upcoming shipment to write the tasting notes that will be included in the package, and thought that readers of the blog might like an advance peek.  The lineup: 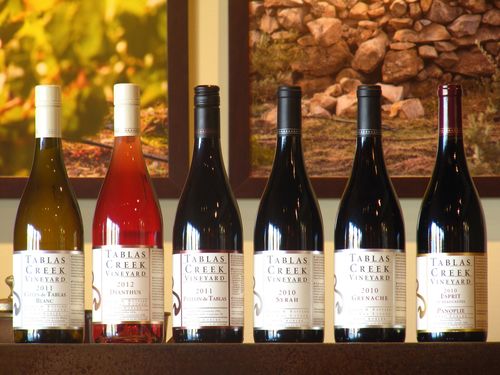 More details on the shipment, including shipping dates, press on the wines, and information about the spring shipment tasting party on Sunday, April 28th, is available on our VINsider News Page.

Back in 1999, we made the bold decision to add a third wine to the Tablas Creek lineup. To the Blanc (white) and Rouge (red) that we were making, we added a pink wine that we called Rosé.  It was really my mom who deserves the credit for encouraging us to make a rosé at all.  She declared that it was crazy that we were growing these grapes that make such wonderful pink wines in the south of France and not at least making a little to enjoy ourselves.  So, in that 1999 vintage we made two barrels of a rosé from a block of vines in our nursery, whose percentages (51% Mourvedre, 35% Grenache, and 14% Counoise) were the proportions of that co-harvested and co-fermented lot.  We did indeed drink much of it ourselves, but also released a few dozen cases into the local market.

The next year, we were pleased to get questions from local restaurants and retail shops asking when our Rosé would be coming out. And bit by bit it developed a loyal following.  Robert Parker called it "the finest California rosé" and "amazing stuff".  We sold hundreds of cases by presale in the California market.  We built events around its release in our tasting room.  And our production grew to nearly 1500 cases in the 2010 vintage, and only declined in 2011 because we realized that with the frost-reduced crop if we made 1500 cases of Rosé we'd sacrifice too much red production.

And it wasn't just us. From such modest beginnings many other rosé-loving producers also started making and promoting small productions of dry rosés, and in a decade we saw a wonderful burgeoning of the American rosé movement. No longer are we one of America's only producers of dry rosé; at this March's Rhone Rangers Grand Tasting, rosé lovers will have some 40 different rosés to choose from.


The American rosé market is not the only thing that has gotten more complex in the fourteen years since we made our first two barrels of Rosé. Our own marketing model has grown and morphed. The names Blanc and Rouge are long gone as we have tried to make our names richer and more descriptive, and from the 2012 vintage we'll end up bottling some twenty-five different labels. One of the drivers of this increased diversity is the Patelin de Tablas project. The Patelin wines are sourced from other top Rhone vineyards in Paso Robles, many of which are planted with our own cuttings, and all of which are producing exciting fruit.  We debuted the Patelin de Tablas and Patelin de Tablas Blanc in 2010, and the wines' fresh, approachable style and $20 price found them an enthusiastic audience.

Last spring, my brother Danny suggested that if we were to produce a Patelin de Tablas Rosé at the same price as our other Patelin wines it would find an equally receptive market.  We'd been toying with the idea anyway, because doing so gave us the chance to work in a different idiom, to make a rosé based on Grenache and with minimal skin contact, in the model of the pale salmon, ethereal Provencal rosés that have driven much of the category's newfound popularity.  I described the process we're using to make the 2012 Patelin de Tablas Rosé in a blog post last September.  It is tasting great, and will be released nationally in April.

The challenge: that with two rosés we couldn't really call one of them simply Rosé unless we wanted to immediately, and continuously, be asked "which rosé?".  So, we started to brainstorm a name that would distinguish our deeper pink -- almost fuchsia -- tones and richer flavors of our Mourvedre-based estate rosé.  Enter Dianthus. Dianthus is a genus of flowering plants known for the deep pink color of their blooms. The family includes 300 different species, including the carnation, and is colloquially referred to in the flower world as "pinks".  Voila.  So, it is our pleasure to introduce the 2012 Dianthus as the successor to our much-loved estate Rosé.  The inaugural vintage will go into bottle week-after-next and be released to our VINsider Wine Club in mid-March as part of one of my favorite shipment lineups ever.  Look for it in our tasting room, and in limited release around the country, in April.

A fertile beginning to 2013

The vineyard is still safely dormant, but our flock is growing. It's lambing season, and we've turned our sheep barn into a nursery.  In the manner of new parents everywhere, I'll share a few baby photos because I can't help but think you'll agree that they're irresistibly cute.

First, we welcomed a little girl we named Molly after soliciting receiving an amazing 176 suggestions on our Facebook page: 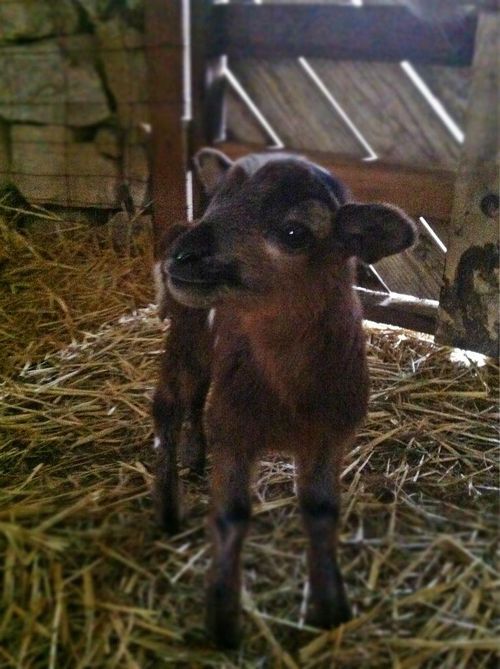 Next, a boy we named Luis after Shawn Luis Dugan, who left us a week ago to pursue his love of flying after two years in the tasting room, cellar and, most recently, heading up our animal program: 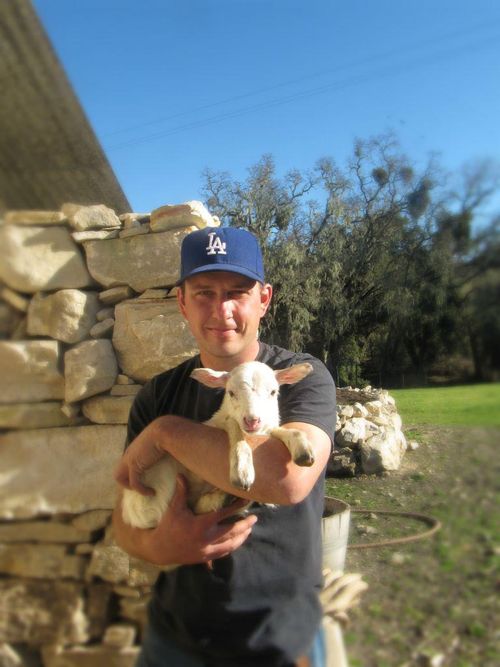 And yesterday, we got twin girls, as yet unnamed: 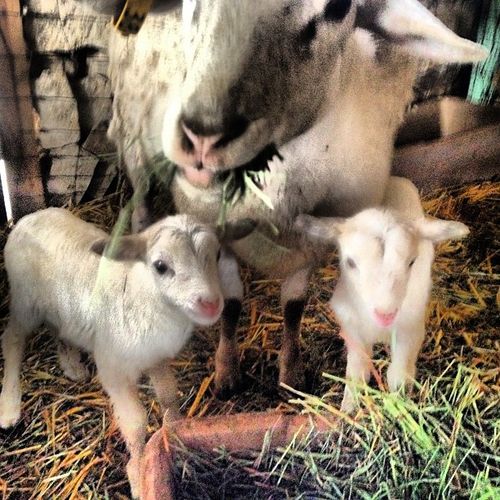 These sheep will join our grazing herd, which is already hard at work chewing down our cover crop, fertilizing the vineyard block they're in, and mixing everything around with their hooves.  We move the flock around to different acre-and-a-half sections every week or so, and keep them together and safe with a movable, lightweight electric fence.

Meanwhile, if you're coming out to the winery, take a look down at the stone lambing barn just below the winery.  You'll likely see, and definitely hear, one of our new kids.

This has been a winter of weather blocks. We had a very wet December and a very dry (and cold) January. So far, February looks like more of the same, without much precipitation in the long-term forecast. But despite the dry weather, we've had a couple of days with some high clouds, which is unusual for us. Eiher it's cloudy and wet, or we have clear skies except for low fog that settles in some mornings. This weekend's unusual weather pattern led to a spectacular sunset. I got several worthy photos, but this one was the best. Perhaps even more impressive, it's unmanipulated. The colors really were this intense. 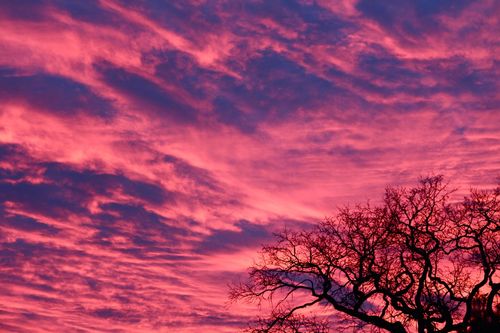 It may not be the rain we need, but we'll take it.