Over recent years, we've become more and more convinced that dry farming is perhaps our most powerful tool in making wines that express their place.  I wrote about this in detail in 2010, and since then most of our new plantings have been very traditional: head-trained, dry-farmed and wide-spaced, reducing the competition from neighboring vines and allowing each vine access to a generous portion of soil from which scarce water can be pulled.  Of course, the vines have to grow an enormous root system to pull out this water, and it's probably of little surprise that the lots from these dry-farmed blocks are typically among the most compelling in our blind tastings.  The En Gobelet wine (read about the 2010 here) made entirely from these blocks is probably the clearest example.

We source the majority of our En Gobelet from a block we call Scruffy Hill, a relatively isolated dozen-acre planting on the south side of Tablas Creek, bordering Vineyard Drive. I spent some time this morning, under rare summer cloud cover, prowling around Scruffy Hill to see how the vines were faring after our second consecutive drought winter and our hot spell a few weeks back.  I was, as I consistently am, blown away by how healthy and vibrant the block looks, typically at least as vigorous as blocks that we plant in the trellised, densely planted configuration more commonly seen in California vineyards.  A few photos will illustrate.  First, an overview of the block, with head-trained vines retreating down the hill: 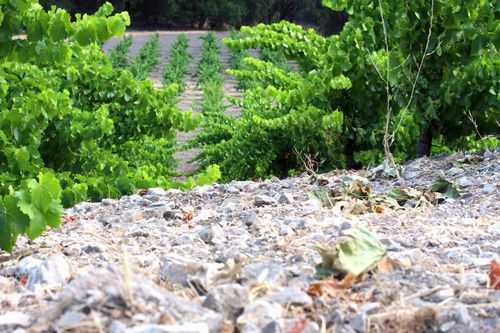 You can see how chalky the soils are even in the above photo. Here's a closeup: 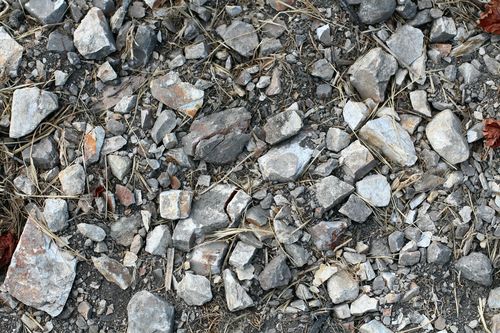 The Grenache vines (which comprise a big piece of this block) are still pre-veraison, vibrantly green but fully sized, ready to change color in the next few weeks: 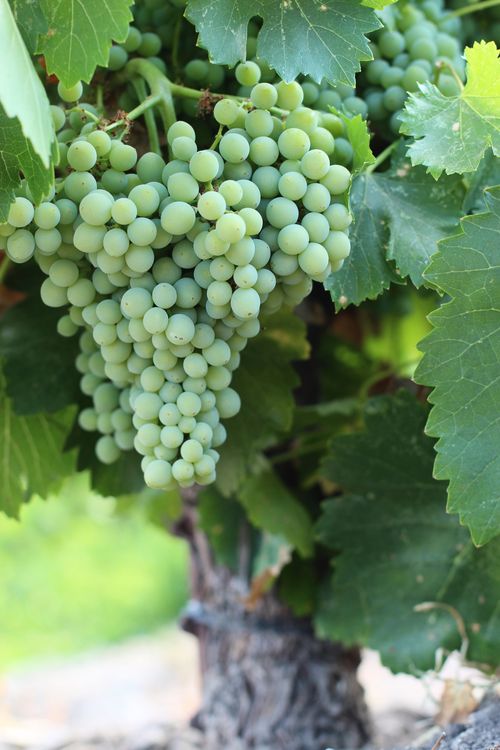 In my ramblings, I found exactly two purple berries.  One is below, presaging the coming transformation: 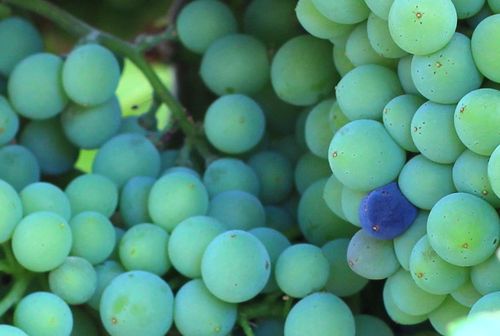 One of the advantages of head training is that the weight of the growing clusters pulls down on the canes of upright-growing grape varieties like Grenache, opening the canopy to the circulation of light and air and reducing the pressure of fungal diseases like powdery mildew.  For the same reason, it's not a great technique for more horizontal-growing varieties like Syrah.  And even when the canes have been pulled down, like in the vine below, the leaves still sit above them and offer shade.  I didn't see a single sunburned berry in my explorations. 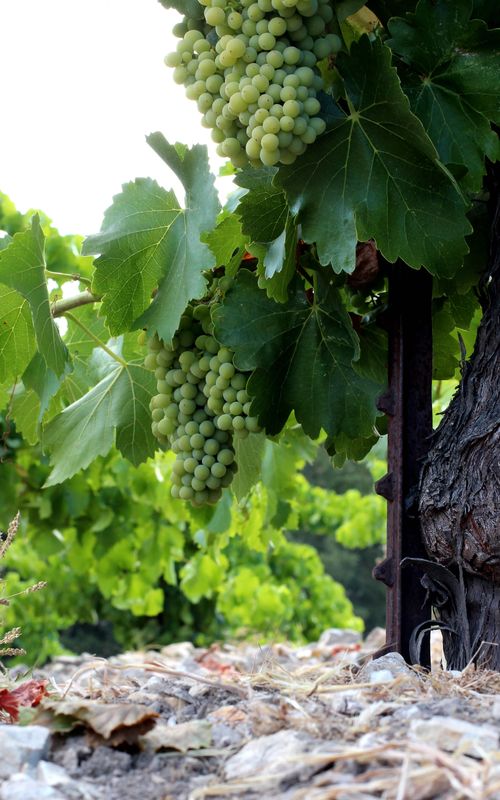 One more photo will give you a sense of the whole picture at this deceptively quiet juncture in the ripening cycle: 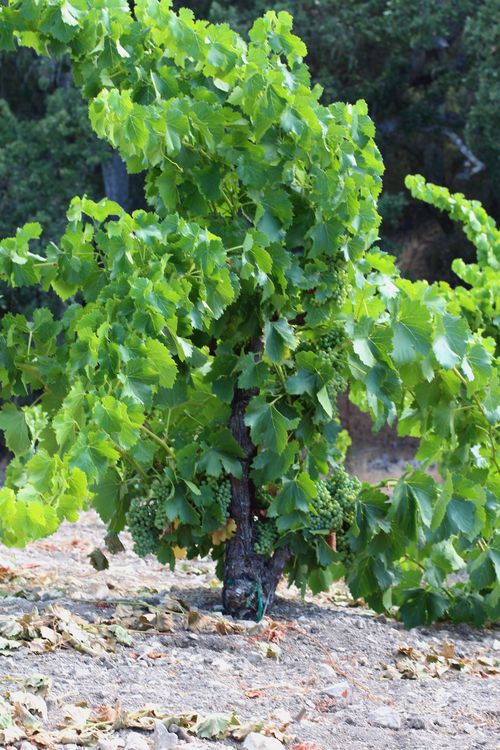 The transformation that will take place over the next few weeks will change the look and feel of the vineyard dramatically.  But for now, things look just great.

Posted at 11:41 AM in Dry-Farming, Pretty Pictures, Vineyard | Permalink | Comments (0)

It was with great pleasure that we received the news that our winemaker Neil Collins was voted by his peers the 2013 Winemaker of the Year for San Luis Obispo County.  You can read the full press release here. 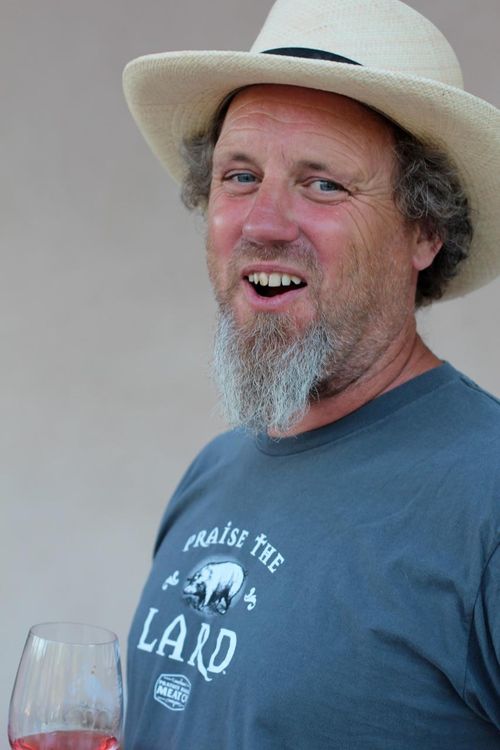 With one exception -- the 1997 vintage, for which Neil was working at Beaucastel -- Neil has had a hand in every vintage of Tablas Creek since our first harvest in 1994, when he was Assistant Winemaker at Adelaida Cellars and we were renting space there.  We used this rented space to make our first few vintages of wine before we'd built our winery and gotten our French clones into production. (Props to anyone who can remember some or all of the names those early wines carried on their labels; leave a comment if you do.)

So that means that this 2013 vintage will make twenty years since we first began to work with Neil, and be the sixteenth vintage he will have overseen here in our estate winery.  What a luxury that continuity is.  Grapevines aren't like most agricultural products; they take years (decades, even) to show their full quality, and a winemaker who joins a project mid-stream might well second-guess the vineyard choices that a previous administration had made and yet not have much flexibility to change it.  To have worked with Neil for so long means that he was involved in turning our vision into reality from the very beginning, and his input in our early choices is reflected across our operations, from vineyard to cellar to the events we host.

Equally important is the fact that Neil oversees both the vineyard and the winery here at Tablas Creek.  These are not, in our view, different worlds, to meet only at harvest.  Our goal has always been to make wines that are at their core expressions of this vineyard, and the choices that we make in the vineyard are a direct result of what we want the grapes to bring to the winemaking process.  Neil has been central in shaping our viticulture efforts, including dry farming, organic and biodynamic viticulture, our animal program and our efforts to bring biodiversity into the vineyard.  This has meant that his work in the cellar begins with grapes that have been grown specifically to emphasize the character of place that our winemaking seeks to highlight.

Perhaps most importantly, it's not every winemaker who is excited to let the expression of place take center stage.  California is full of wines that bear the indelible stamp of winemakers' stylistic decisions, from signatures of new oak barrels to specific yeast strains, extreme levels of ripeness or extraction.  It takes a winemaker with a particular personality and a high level of self-confidence to let his or her own work be to modulate and reinforce the signatures of place, grape and vintage.  We are exceptionally fortunate to have found in Neil such a winemaker, who despite plenty of creative vision -- on full display in the wines he makes for the Lone Madrone label he owns with his wife Marci and his sister Jackie -- is willing and able to step into the background in order to give pride of place to ... well ... place.

Congratulations, Neil, and cheers to many more great vintages.

Assessing the impact of the recent heat wave

Our recent heat wave has finally broken.  Today's high was 82°, and it's already dropped a few degrees since then as a brisk on-shore breeze has picked up.  This is a welcome change from recent days, the last eight of which all topped out at 95° or above.  Five days topped 100°, with a peak of 106.7° on June 30th.  Although the heat here at Tablas Creek wasn't quite as bad as many forecasters predicted (or as bad as some other regions further inland and north of us) it's still an extended stretch of hot weather, with unusually warm nights as well as very hot days.  The below graph shows our high, low, and average temperatures over the last ten days: 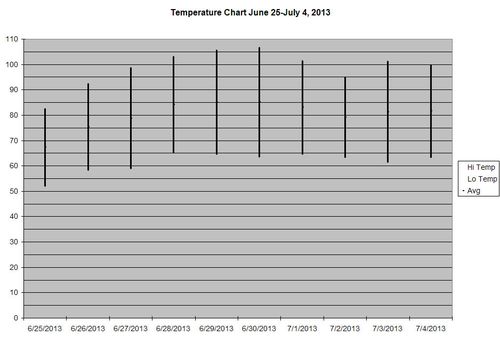 Given that the next week or so shows moderate summer weather with days topping out in the 80's and lower 90's, I decided to take a walk around the vineyard to assess what impact, if any, we saw from the hot spell.  While there was some damage from sunburn on heat-sensitive and canopy-light varieties like Mourvedre, I was pleased to see that the losses weren't even as bad as what we saw from a similar heat wave last August.

First, a few photos that will show you what sunburn looks like.  The clusters below are typical, with berries that are on the outside top shoulder of the cluster turning to hard, dry, sour raisins while the majority of the cluster remains unaffected: 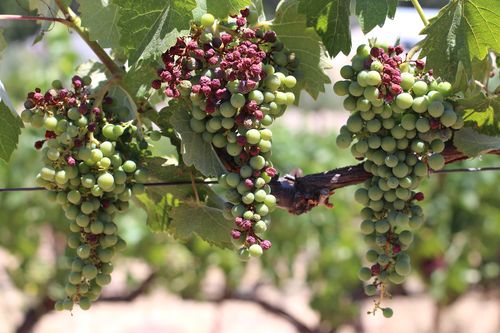 A close-up of a different sunburned cluster, taken from above in a head-trained block, shows again the typical scarring that the extreme heat leaves on the plant's exposed tissues: 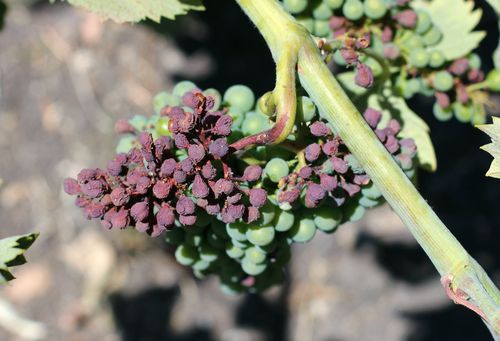 These raisins will dry up and fall off later in the summer and won't impact the quality of the remaining berries in any way.  But before you think that every cluster was affected, it's worth noting that at least as many clusters look like the one below after having received sufficient shelter from their canopy of leaves: 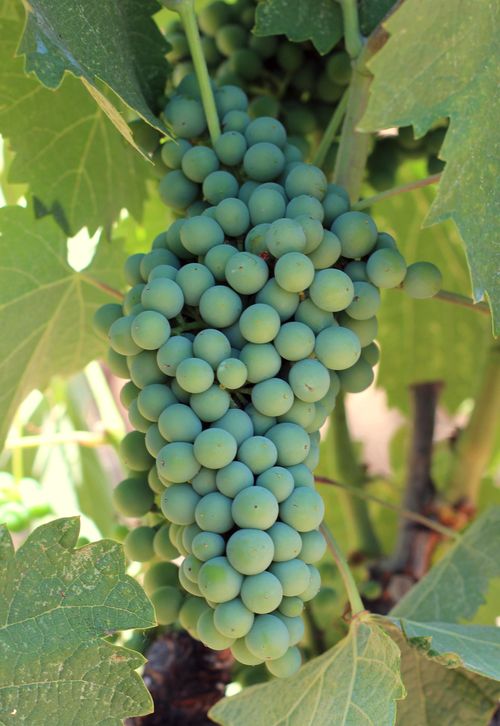 From my walk, I'd estimate that we lost between 10% and 20% of our Mourvedre to sunburn, and something much less than 5% of our other varieties.  That's not negligible (we probably lost something like a dozen tons of Mourvedre, or enough to make about 700 more cases of wine) but it could have been much worse, and likely would have been worse had the temperatures gotten up around 110 over three or four days, as they were originally forecast to do.

The vineyard itself looks terrific.  Hot spells like this one can cause whole blocks to start looking tired, leaves starting to yellow or brown and vines just looking exhausted.  I didn't see anything like this; the canopies are almost electric green still and look vibrantly healthy.  The below photo looks over a head-trained Tannat block up to Grenache Blanc on the hill: 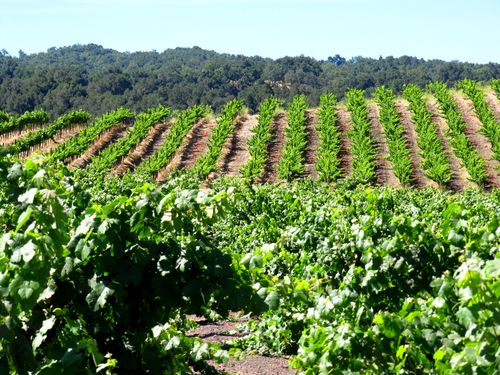 There is still a long way to go; we haven't even seen the beginnings of veraison yet in early varieties like Syrah and Viognier.  But we seem to have weathered this particular challenge in good shape, and the vineyard looks strong as we approach the midpoint of the ripening cycle and get ready to turn for home.