Just after Christmas, Jason and I had the fun and honor to be invited to pour Tablas Creek for guests at the last 49ers game of the season.  The sparkling new Levi's Stadium has built-in wine bars incorporated into their club boxes, and the team invites eight wineries each week to show their wines to the fans sitting in that section. We poured before the game and during the half, and were able to watch the 49ers win from one of the boxes, whose owners we'd met during the pouring.  Yes, it was a down year for the Niners, but still, what a treat! 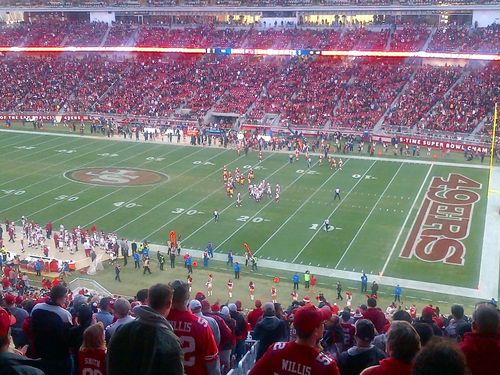 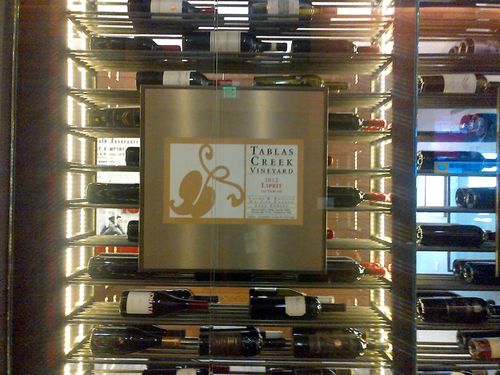 It is wonderful to see how the 49ers have built their connection to California's wine country, and how they celebrate it at the games.  The program started, in a small way, with an invitation to the owner's box at Candlestick Park on the occasion of their first home game in the fall of 2002.  We were thrilled that, way back then, Tablas Creek was the winery chosen to inaugurate the tradition.  Over the next decade, a different winery was chosen to present its wines at each subsequent game. 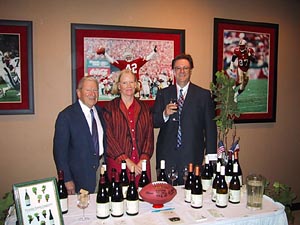 On that first occasion, my wife Barbara and I (right, with team owner Dr. John York) joined Jason and his wife Meghan on the trip.  We watched the game from the York family box and got to join a tour of the field where we watched for a few minutes from the sidelines.  I strongly remember Terrell Owens catching a pass and heading my way with terrifying speed and power.  I stepped way back.  And oh yes, by the way, we met other invitees Senator Diane Feinstein, chef Thomas Keller, Mayor Willie Brown, running back Roger Craig, and baseball Hall of Famer Orlando Cepeda who also dropped by.  Quite a day, and a pleasure to get to spend some time with the 49ers owner, John York. 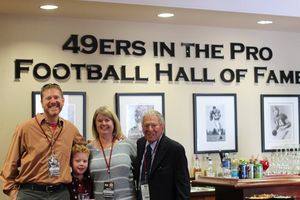 Last year, the 49ers commemorated Candlestick Park's final season with a "greatest hits" recap of the wineries who'd been invited over the previous decade.  We were again honored to receive an invitation from Dr. York, and I made the trip up with Jason and Meghan, and their son Eli (right) to watch the team defeat the Arizona Cardinals.

Since the team's move to Levi's Stadium this year, the program has been expanded and acquired a name: Appellation 49. With eight wineries showing wines in the atrium at the club level, wineries get to meet several hundred fans at each game, and over the course of the season, owners of the boxes get to taste the wares of 80 different wineries.  If they like something, they can order it from their box. A portion of the proceeds go to the 49ers Foundation, which does great work in the Bay Area community year-round.  Different than before but still great fun, and probably more valuable promotion for us as a winery.

It's clear that this connection with the local wine community is something that the York family values and is looking to build. Any time they ask us to help with this particular bit of bridge-building, we're happy to oblige. 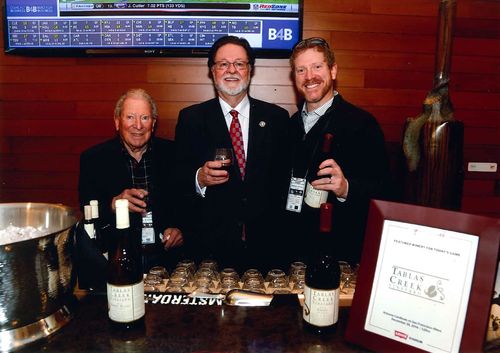 [Editor's Note: We have updated this post as of January 2021. You can find that post at Wine Shipping State of the Union, 2021 Edition.]

The preamble to the United States Constitution is short and sweet:

"We the People of the United States, in Order to form a more perfect Union, establish Justice, insure domestic Tranquility, provide for the common defence, promote the general Welfare, and secure the Blessings of Liberty to ourselves and our Posterity, do ordain and establish this Constitution for the United States of America."

As we look forward to tonight's 226th State of the Union address, I am struck by the "more perfect union" reference in the preamble, as well as the wisdom of the founding fathers and generations of Supreme Court justices in prioritizing the Commerce Clause, which protects the federal government's exclusive role in regulating interstate commerce.  The 21st Amendment, which repealed Prohibition in 1933 and as a side-effect sheltered states from the Commerce Clause's requirement to maintain an open, fair market for all players, provides a glimpse into what a world absent the Commerce Clause might look like. We should all be thankful that most products we might want to buy don't have to face a similar regulatory nightmare.

So, in honor of the State of the Union, here is a summary of what the world of wine shipping looks like, from a winery's perspective, as we enter 2015, with states broken down into tiers based on the cost and ease of doing business there:

Shipping map courtesy of the great free tools at ShipCompliant

Tier IV: Difficult/expensive but worth the cost (TX, VA)

Every winery has a different breaking point.  For us, it comes here.  We've decided that the 35 states above all warrant the expense of the annual permits and the reporting, though it's a close call on some in that last tier.  The 16 states below we either can't ship to, or have found that the requirements to do are unreasonable.  But before I look at those, it's worth doing the math on what shipping to the 35 "shipping" states costs in total: $6853 in permits plus the time and expense of preparing and filing 546 reports each year.  Figure an hour for each report, at $25/hour ($13,650) for a total expense of $20,503.  But for that cost, we can ship to 76.5% of the US population.  Available tools (like ShipCompliant, which we use and recommend highly) provide a savings over the labor of preparing the many individual reports, but still come with a cost.

Why don't states make the cut?  The reasons vary, and you'll notice that some of the "no-ship" states fall into more than one category.  But in most cases, you'll see some effort toward protecting distributors from competition, at the expense of both consumers and wineries.

About to join tier II (MA)

It's a quiet interlude here at Tablas Creek.  We're starting to slowly prune the vineyard, but with budbreak two months or (hopefully) more away, there's not great urgency.  The 2014 vintage wines are nearly done fermenting, but not quite done enough to start blending.  We have our first bottling in mid-February (hooray for new rosés!) but we're not quite close enough to start our serious prep on these wines.

So, mid-January is a time to enjoy a slower pace, assess where we are and what we'd like to do for the year, and enjoy the lush, green landscape.

We're not the only ones enjoying this new landscape; we have the first of our 2015 vintage of lambs, born to the ewes who make up our grazing herd: 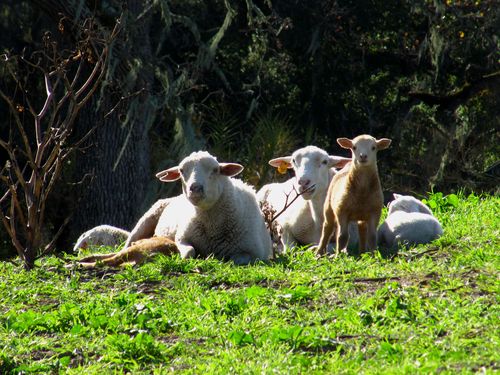 As you would expect, the natural cycles of grazing animals in whatever climate look to produce their offspring when the grass is the lushest.  So, this is just the beginning of a wave of new lambs that starts now and should continue through March.

A few more photos of the new arrivals: 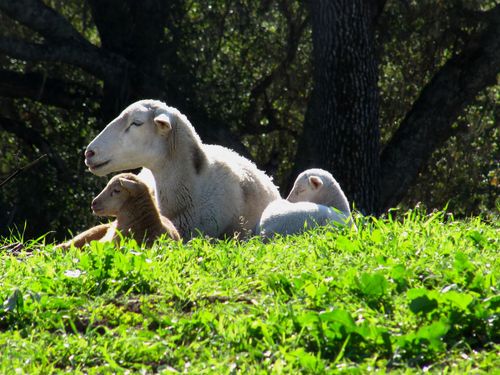 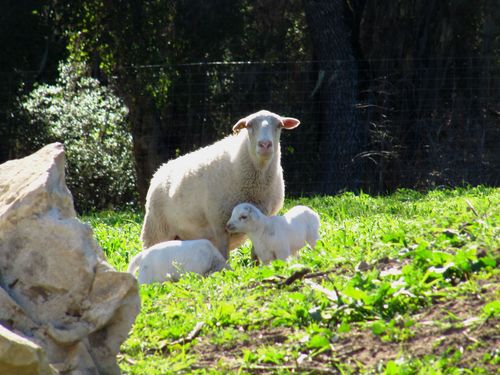 May your 2015 have started as hopefully as ours!

A Retrospective Tasting of Every Wine from the 2005 Vintage

Last year, we began what I hope will become an annual tradition: looking back as each year begins on the vintage from ten years previous.  Doing so encourages us to open wines that we wouldn't otherwise open with a decade of age, and gives a wide-ranging perspective on the vintage as a whole and how it has developed over time.  It also allows us to choose a representative and compelling subset of the lineup for the public retrospective tasting we're holding on February 28th.

A few years ago, as part of a look back at each of our vintages for the launch of our redesigned Web site, I wrote this about the 2005 vintage:

The 2005 vintage was one of nature's lucky breaks, with excellent quality and higher-than-normal yields. The wet winter of '04-'05 gave the grapevines ample groundwater, and a warm period in March got the vines off to an early May flowering. The summer was uniformly sunny but relatively cool, and harvest began (relatively late for us) in the 3rd week of September, giving the grapes nearly a month longer than normal on the vine. The resulting wines, both red and white were intensely mineral, with good structure and powerful aromatics.  Red wines have big but ripe tannins that reward cellaring.

I was interested in the extent to which we'd still see what we'd noted when the vintage was younger.  Would the red wines have softened, or would they still show the brawniness that characterized them in their youth?  Would the whites have retained their freshness in what was a fairly ripe vintage, overall? And would the sweet wines, which I found disappointing in last year's retrospective, show better?

In 2005, we made 20 different wines: 9 whites, 1 rosé, 7 reds, and 3 sweet wines.  But on Friday, we tasted 21 different wines, because as part of our ongoing experimentation between corks and screwcaps, we bottled our 2005 Cotes de Tablas under both closures, to track how each closure impacted the wine's development over time. The lineup:

My notes on the wines, with notes on their closures, are below (SC=screwcap; C=cork). Each wine is also linked to its technical information on our Web site, if you'd like to see a breakdown of the winemaking or the tasting notes at bottling. For some reason, we never made Web pages for 2005 Viognier or 2005 Bergeron. I'm sorry about that; if you have a technical question; leave it in the comments and I'll do my best to answer.

I was happier, overall, with how the wines showed than I was with the 2004's last year. That's probably indicative of the strength of the vintage, which was overall a great one (2004, by contrast, was probably more good than great). Of all the wines that we tasted, there wasn't a single one that tasted over the hill to me, and only a couple (Grenache Blanc, Roussanne) that I found only so-so.

I was thrilled that my favorite white and red were in both cases the Esprits. This showed clearly to me the value of blending, with the flavors of each varietal highlighted and focused by the additions of the other grapes. It wasn't that these wines were the biggest or the most powerful; instead, they were the most complete and the most complex, with the best clarity and persistence. Exactly what we'd want our signature wines to be.

The cork/screwcap contrast on the Cotes de Tablas was really fascinating, and provoked the most discussion around the table. We split nearly evenly as to which we preferred, with some people opting for the depth and weight of the cork finish and other choosing the clarity and vibrancy of the screwcap finish. In earlier tastings, we'd seen more consensus around the cork finish, which spurred me to go back and re-read my blog post Bottle Variation, Very Old Wines and the Cork/Screwcap Dilemma from 2008. In it, I examine a presentation from Bonny Doon's Randall Grahm in which he posits that most wines, in the long run, probably do benefit from screwcap's protection from oxidation.  The more I learn, the more I think he's right, with one important caveat: that most red wines aren't aged long enough in bottle to get to the point at which the freshness preserved outweighs the depth lost. This tasting provided another data point: perhaps, out 10 years, is where the two meet, at least on this wine.

Finally, we chose what I think will be a pretty fun list of wines for the February 28th Horizontal Tasting: Vermentino, Viognier, Esprit Blanc, Counoise, Cotes de Tablas (screwcap), Cotes de Tablas (cork), Mourvedre, Esprit, Panoplie, and Vin de Paille. I hope many of you will join us!