Tasting the wines in the Spring 2020 VINsider Wine Club shipments

Each spring and fall, we send out a selection of six wines to the members of our VINsider Wine Club.  In many cases, these are wines that only go out to our club.  In others, the club gets a first look at a wine that may see a later national release.  About 6 weeks before the club shipments will be sent out, we open them all to write the tasting and production notes that will be included in the club shipments.  In many cases, this tasting is our first post-bottling introduction to wines that we'll come to know intimately in coming months and years. In some cases (like this time) where the shipments contain wines that aren't yet even bottled (they will be the last week of February) it's a chance to get to know wines that are newly finished.  I always think it's fun to give followers of the blog a first look at these notes.

These shipments include wines from the 2017, 2018, and 2019 vintages.  Tasting three vintages together is a great way to get a handle on their relative personalities, and typically my first chance to do a personality assessment on the newest vintage, which we haven't even started blending trials on yet. My quick thoughts, after the tasting, are that 2017 is a blockbuster, where every wine shows density and lushness, with powerful fruit but the structure to age. I feel like I can taste the health of the vineyard from the 43 inches of rain we received. 2018 is noteworthy for its vibrancy. It's a vintage whose whites have some of the highest acids we've seen in recent years, yet the balance between fruit, acid, and mineral gives the wines a purity and varietal expressiveness that reminds me of 2015 (but with a bit more concentration). Finally, the 2019s, as much as one can tell from tasting two wines, seem to strike a midpoint, with plenty of concentration, good acids, and lovely texture.  I'll start with the classic mixed shipment, and then move on to the red-only and white-only shipments, noting which wines will be included in each. I was joined for the tasting by Winemaker Neil Collins, Senior Assistant Winemaker Chelsea Franchi, and Tasting Room Manager John Morris. There are three additional wines (2018 Viognier, 2018 Marsanne, and two bottles of 2019 Roussanne as well as a second bottle of the 2019 Vermentino) in the white-only shipment:

If you're a wine club member, you should make your reservation for our shipment tasting party, where we open all the wines in the most recent club shipment for VINsiders to try. This spring's party will be on Sunday, April 5th.  If you're not a wine club member, and you've read all this way, then why not join up, while there's still a chance to get this spring shipment? Details and how to join are at tablascreek.com/wine_club/vinsider_club 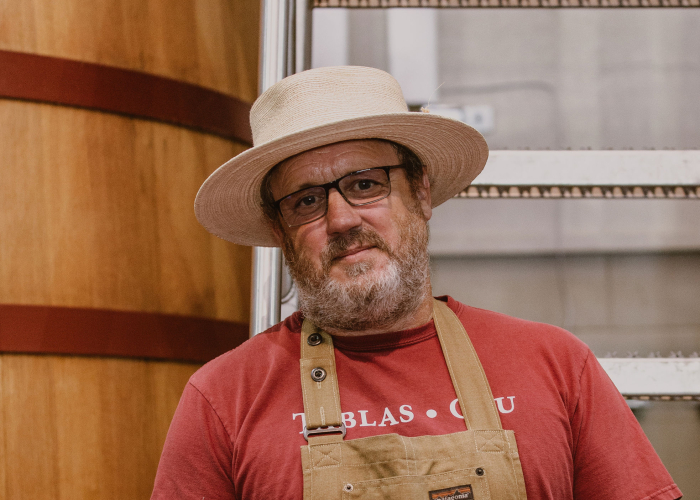 With one exception -- the 1997 vintage, during which Neil was working at Beaucastel -- Neil has had a hand in every vintage of Tablas Creek. We first met him in 1994, when he was Assistant Winemaker at Adelaida Cellars, where we rented space to make our first few vintages of practice wine. By the time we'd gotten our French clones into production and built our winery in 1997, we'd become so impressed with Neil's work that we offered him our winemaking position and the opportunity to spend a year working at Beaucastel. We're honored that he's been here ever since.

Along the way, Neil created two other businesses here in the Paso Robles area, and this award recognized these contributions at least as much as his winemaking at Tablas Creek. He started the Lone Madrone label with his wife Marci and his sister Jackie in 1996, through which he has championed dry-farmed vineyards on Paso's West side while focusing on heritage grapes like Zinfandel and Chenin Blanc, along with (of course) Rhones and the occasional parcel that was too good to turn down. Nebbiolo, anyone? And as if that wasn't enough on his plate, for the last decade he's been leading a Central Coast cider renaissance through his Bristol's Cider label and the Bristol's Cider House in Atascadero.

When my dad and Jean-Pierre and Francois Perrin started Tablas Creek, they felt pretty confident in their abilities to grow, make wine out of, and sell Rhone grape varieties. (As it turned out, that assumption was probably a little optimistic, but what great adventure ever gets started without a little unwarranted optimism... and anyway, that's a story for another day.) What they found in Neil, in addition to a man with relentless curiosity and legitimate hands-on winemaking chops, was someone who was steeped in Paso Robles. Although he's not a native, he spent his whole winemaking career here, from its early days with Ken Volk at Wild Horse through his extended stint with John Munch at Adelaida. I know that it meant a lot for him to have Ken, who gave him his first job in wine, be the one who presented his award at the Gala. I videoed the presentation speech:

You might well ask how he's able to run what is in essence three separate businesses while still holding down a full-time job here at Tablas Creek. That's part of what makes Neil special. He has a great ability to get things rolling, empower the people who work for him, and then keep tabs on the status of the many projects he's working on without having to (or, just as importantly, feeling like he has to) do everything himself. But it's not that he's content with the status quo. Far from it. His relentless experimentation is one of the things that has allowed Tablas Creek to grow and thrive the way it has under his watch. And it's one of the reasons why his lieutenants here at Tablas Creek tend to stay for the long term. I asked Senior Assistant Winemaker Chelsea Franchi, who's been here more than a decade herself, to share her thoughts on Neil, and I loved what she told me: "One of the things I love most about working with Neil is watching him build community and having the chance to be part of it. You see it in his close-knit family for sure, but it extends well beyond that. His groups of friends and colleagues, the family he's built in the Tablas Creek cellar team, his employees from Lone Madrone and Bristols - it's a true delight to be near someone who cares deeply about the humans around him."

I think you'll get a good sense of why people want to work with and for Neil from his acceptance speech:

It's an honor to call Neil a colleague and a friend, and I couldn't be more excited that he received this recognition.