Why Annual Rainfall Is the Wrong Metric to Understand California Weather

After our lovely, wet December, the last six weeks have been almost completely dry. The last week has seen headlines that feel like flashbacks to 2015 or 2016, including Brush fires rage in Southern California amid record heat, worsening drought (Washington Post), California’s Drought-Relief Dreams Are Quickly Drying Up (Bloomberg), and As drought continues, Southern California offers millions to buy Sacramento Valley water (Sacramento Bee). And yet, here at Tablas Creek, 2021 finished with above-average rainfall at nearly 30 inches.

Although we do get more rainfall than most of the Central Coast, we're not alone in having 2021 be an above-average rainfall year. The city of Paso Robles recorded 16.75", about 119% of their 75-year average. Downtown Los Angeles saw 14.27" of rain, which was 98% of their 60-year average. So why are climatologists and reporters so downbeat about our current totals?

The secret to making sense of this is understanding the difference between the calendar year and the water year. In a place like California where nearly all our annual precipitation comes in the winter, the break between one calendar year and the next is not a meaningful way of looking at current conditions. Our rainfall distribution is such that in the winter, we're a rain forest climate, while in the summer, we're a desert (climate graph from the site climate-data.org, on which I spend probably more time than is healthy): 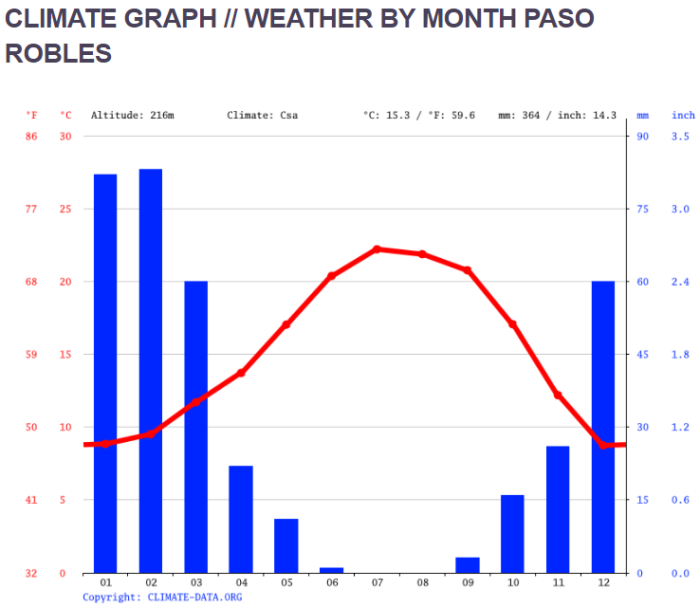 As you can see, the calendar year ends just as the water year is really getting going. Take the winter of 2020-2021. We saw a punishingly dry early winter that left things in late January looking more like we'd expect in November than in March. We shared a piece on our social media in mid-January that I found really dramatic: a photo taken from the same spot on the same day in 2022 (exceptionally green) and 2021 (entirely brown): 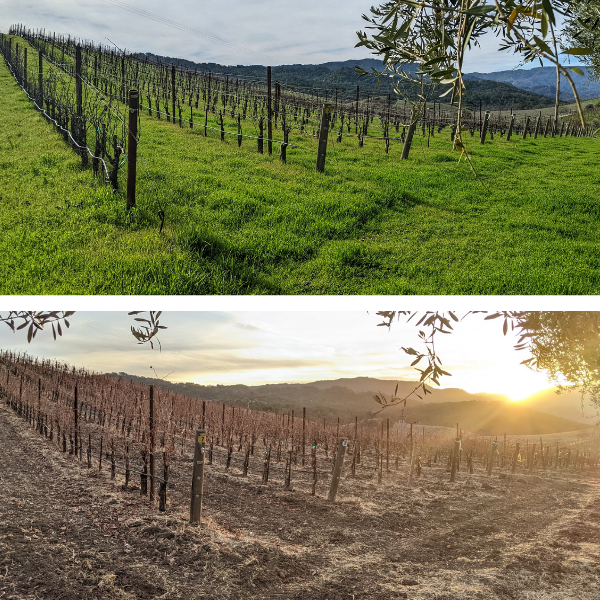 When the rain did come last winter, it came with a vengeance, in the form of an atmospheric river that dumped more than a foot of rain on us in roughly 48 hours on January 27th and 28th. That ended up being most of the rain we got last winter, with just over an inch more before summer came. But still, the 13.85" we got January-June was more than 80% of our averages for those months. Combine that with the 14.2" of rain we got in our wet October and December, and you end up with a year that looks like it was 12% wetter than average. Instead, what you really have is a function of the calendar. Last winter's total of 15.09" was just 60% of a normal rainfall year. And unless some unforecasted rain comes before the end of February, we'll be below 80% of normal rainfall for this rainfall year too.

There's still time. March is often one of our wettest months, averaging more than four inches of rain. As recently as 2018, a "Miracle March" turned what looked like a truly scary rainfall picture into something closer to average. And thanks to our wet December, we're worlds ahead of where we were that winter. But unless it rains again soon, we're likely to see early budbreak as drier soils and the higher soil temperatures they allow cue the grapevines to begin their growing season. And more visibly, scenes like the below one will start to move from green to gold as the grasses go to seed in preparation for the long, dry summer: 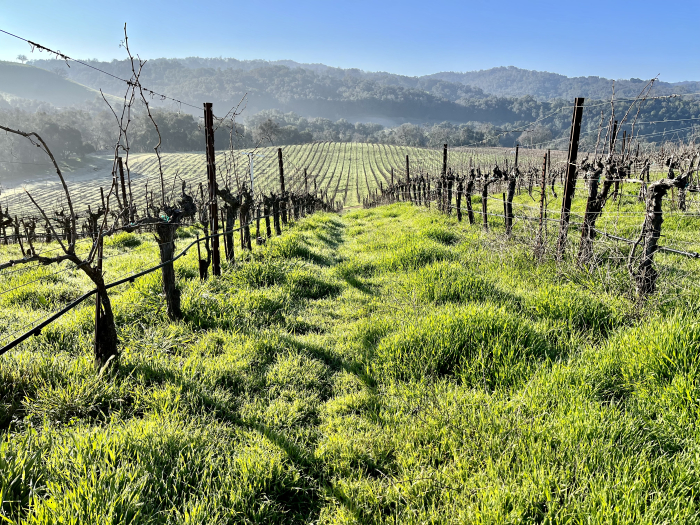 None of that would be the end of the world. But we know that the clock is ticking on this rainfall year, with only another couple of months to go. So while 2022 is just getting started, the 2021-22 rainfall year is already on what feels like its final lap.

Last summer, I wrote a blog I called A Winery Carbon Footprint Self-Assessment: Why I Can't Give Us an "A" Despite All Our Progress in which I broke down how we stacked up against the baseline California winery across all the components that make up our carbon footprint, from vineyard to winery to packaging and transport of finished wine. Overall, we look good against the baseline, thanks to the combination of organic farming with minimal outside inputs, solar power, and the lightweight glass that we use for all our bottles. My rough estimate is that we have about 60% of the carbon footprint of the baseline.

One of the things that was really driven home to me as I did this research was the importance of the packaging in wine's overall environmental footprint. According to the assessment of California Wine's Carbon Footprint published by the California Sustainable Winegrowing Alliance (CSWA) in 2011, which is what I used as my baseline, more than half of California wine's impact is due to the packaging in glass bottles. And that's not surprising; glass is energy-intensive to make and transport, as it requires high temperatures to melt and mold and is heavy to transport. Moving to lightweight glass reduces a winery's footprint by 10%, while using heavy bottles adds 10% to that tally, according to the CSWA's report: 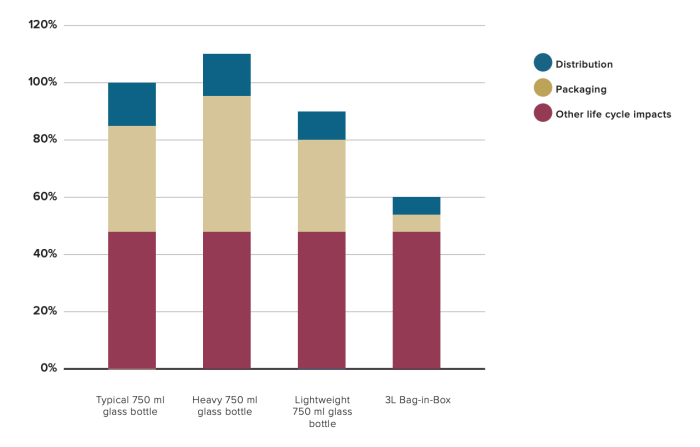 In the piece, I did mark us down a bit for not using the 3L bag-in-box, which is by far the most effective package for reducing wine's carbon footprint. But I admit that I didn't take it particularly seriously, as the market for the 3L wine boxes is still (at least in the United States) almost entirely a bottom shelf one, with boxes topping out around $30 retail. Given that our least expensive wine at the time was $25, and the box contains four bottles, I didn't think it was an option for us.

After I published this piece, I got a number of interesting comments that made me rethink that position. A great example is one on my personal Facebook page from friend and former wine blogger Jason Mancebo:

Really great effort here, Jason. Tons of respect for your efforts and transparency in that effort! One thing that rubs me a bit wrong is: ...."we don't use the bag-in-box 3 liter package (the best available package, in terms of CO2 footprint) at all, and likely won't as long as it still carries the stigma of grocery store generic."
Leadership requires risk and without risk, this (stigma) won't ever change. A winery of your size and your commitment to environmental issues is a perfect "Poster Child" to change the stigma. As a consumer I wish I had more choice on quality wine than the 750 glass bottle. Cans are great, but limited selection and volume requirements = lower quality. the 3L would be great, especially to ship for @home consumption. Go for it! Be the change!!

Since then, I've found my own feelings around the 3L bag-in-box evolving. And Jason was right; the issues with the format -- at least for wine made for short-term consumption -- are almost entirely about consumer perception. After all, think of the advantages:

Of course, there are unknowns about this package too. Is it good for long-term aging of wine? I'd doubt it. Is the package recyclable? The boxes are, although the plastic pouches inside are not in most places. (Of course, in America our glass recycling percentage is a disheartening 31%, so this still means a lot less trash headed to the landfill on average). And will people buy it at a price that allows higher-end wineries to adopt the package? I floated on Twitter that we were thinking about trying it with our new vintage of Patelin Rosé and got a heartwarmingly enthusiastic set of responses.

A timely piece on boxed wine by @dmwine. At @TablasCreek we're tentatively planning on putting a small portion of our 2021 Patelin de Tablas Rosé in 3L bag-in-box to test the waters. There are huge environmental and carbon footprint rewards if it works. https://t.co/lZR4rwe7aP

It seems like it's time to find out the answer to the question "will people buy a high-end wine in a box". To that end, we've decided to dip our toe into this water by diverting 100 cases of the 2021 Patelin de Tablas Rosé into 300 3L bag-in-box packages. The Patelin Rose seems like a great place to start, since it's a wine that we suggest that people drink in the near-term anyway. A few photos of the process. First, Austin at the filling machine (left) and Chelsea building boxes (right): 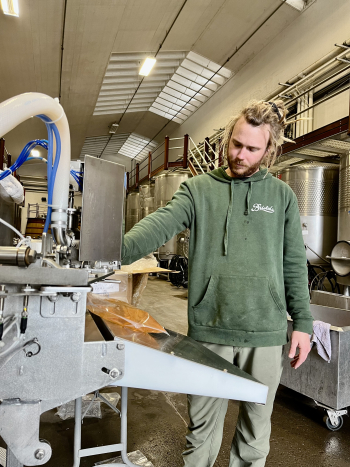 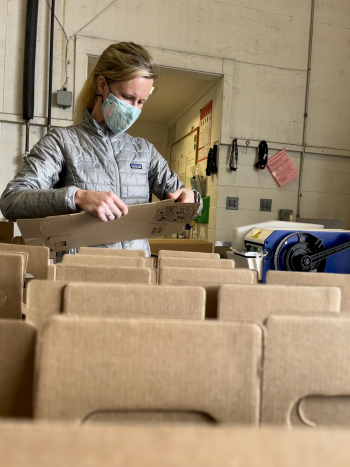 Then Gustavo putting on labels (left) and the finished box (right)! 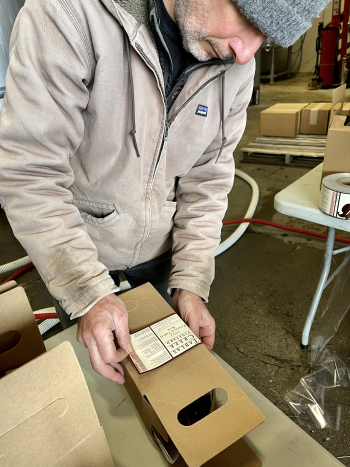 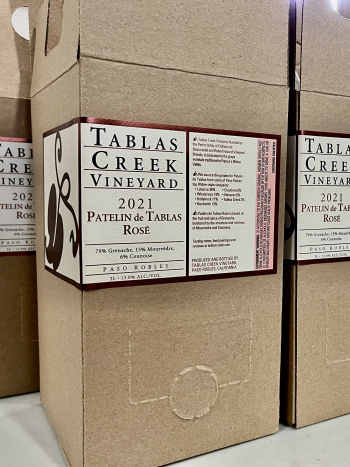 Since we're paying less for the packaging, we'll be passing along that savings to customers, pricing each box at $95 instead of the $112 that the four bottles would cost. Because it takes up less space and weighs less, we can pass on shipping savings too, counting each box as two bottles for shipping rather than four.

Will that be enough to tempt people who might not have dreamed of buying a box of wine? I hope so. For this batch, we're only making it available for sale direct, i.e. on our website and in our tasting room, so we can explain directly to the customers who might be interested why we've made this choice. If it works, we'll do it with some additional wines going forward. If it really works, we might even make enough next year to sell some wholesale. After all, there was a time when screwcaps were considered appropriate only for cheap wines. And when wine in keg, to be ordered by the carafe or glass, was unheard of. But in both cases we decided that we trusted our followers enough to try, because we thought that the decisions were the right ones for the wines. In this case, we think it's an important approach to try both for the wine, and for the planet. 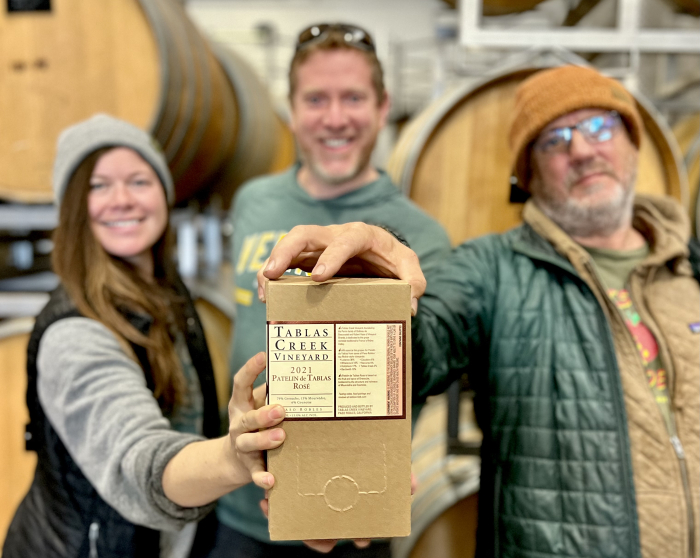 No time like the present to find out if we're right. If you're on our mailing list, look for an email next week announcing its release.

Posted at 09:39 AM in Sustainability Matters, Wine Marketing | Permalink | Comments (54)