About the Tablas Creek blog

The Tablas Creek blog provides thoughts, reports, photographs and the occasional video from Tablas Creek Vineyard, in Paso Robles, California.  It is maintained by Jason Haas, Partner and General Manager at Tablas Creek, and includes the following contributors: 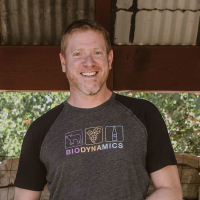 Jason Haas is Partner and General Manager at Tablas Creek Vineyard, and the principal author of pieces on the Tablas Creek blog (all pieces not signed by another author are his). The son of Tablas Creek Vineyard founder and renowned importer Robert Haas, he learned the wine business at an early age, accompanying his family on yearly European wine-buying trips and spending two summers working at Château de Beaucastel.

After obtaining a Master's Degree in Archaeology from Cornell and spending a four-year stint managing a tech company in Washington, DC, Jason moved to California to join Tablas Creek in April of 2002.  He runs the operations at Tablas Creek, including overseeing winemaking, marketing, sales, and distribution.

In addition to his work at Tablas Creek, he has served on the board of directors of the Paso Robles Wine Country Alliance, the Rhone Rangers, Free the Grapes, and Family Winemakers of California. He speaks at events around the country on topics including Tablas Creek, Rhone varietals, organic farming, and the Paso Robles region. 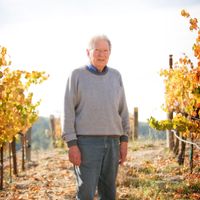 Robert Haas played a leading role in the American wine industry for over half a century. After graduating from Yale in 1950, he joined his father's firm, M. Lehmann, Inc., a retailer of fine wines and spirits in Manhattan. As a buyer for the company, Haas traveled through the cellars of France, establishing a formidable reputation as a wine taster while forging lifelong relationships with premier wine producers.

In 1973, he started Vineyard Brands to import fine estate wines from Burgundy, Bordeaux, the Loire, Alsace and the Rhône Valley, where he met the Perrins of Chateau de Beaucastel and became the exclusive American importer for Beaucastel. As the company grew, it introduced the American market to brands such as La Vieille Ferme, Marqués de Cáceres, Warre's Port, and many California “boutique” wineries and estate-bottled French domains.  The company served as a representative for newly emerging California wineries including Chappellet, Freemark Abbey, Clos du Val, Joseph Phelps, Hanzell, Kistler, and Sonoma-Cutrer. In 1984, he founded and moderated the quadrennial bi-lingual symposium "Focus on Chardonnay" to promote dialogue between producers in Burgundy and California.

Haas was one of four American members of the Académie Internationale du Vin, an elite organization dedicated to recognition of authenticity of origin.  He served on the board of the Paso Robles American Viticultural Area committee. He was recognized by the Paso Robles Wine Community as 2007 Wine Industry Person of the Year, and in 2014 he received a lifetime achievement award from Rhone Rangers for his contributions to the American Rhone movement. Robert Haas passed away on March 18, 2018, one month from his 91st birthday. Read the tribute to his father, written by Jason Haas, on the Tablas Creek blog. His articles are archived here. 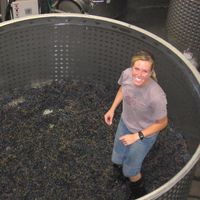 Chelsea Franchi grew up in the Sierra Foothills of Northern California with a family that encouraged (and applauded) her enthusiasm and fascination for wine. She attended Cal Poly in San Luis Obispo to study Agricultural Business and Wine and Viticulture. While working on her degree, she got a job at Tablas Creek as a Greeter/Hostess and from there, moved into the tasting room. Upon graduation in 2008, she started her production career working hard as a “cellar rat” under the guidance of Winemakers Neil Collins and Ryan Hebert. To further her knowledge and appreciation of wine, she took the first level sommelier exam in the middle of her first harvest. Her hard work and eagerness to learn paid off when she was offered the title of Assistant Winemaker in 2009.

Chelsea writes the Notes from the Cellar series on the Tablas Creek blog and thinks she has the best job in the world. 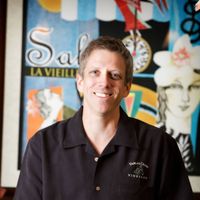 After growing up in the culinary wasteland of 1970’s Flint, Michigan, John landed in Seattle and spent 20 years discovering and developing a love for food and wine (ok, it was beer first) all the while playing music and working in the burgeoning specialty coffee business.

John relocated to the Central Coast in search of sun in 2005, and has been the tasting room manager at Tablas Creek since the summer of 2007.  When not at the winery, John can be found working on his ½ acre hobby farm and orchard in east Paso Robles.

John writes the View from the Tasting Room series on the Tablas Creek blog. 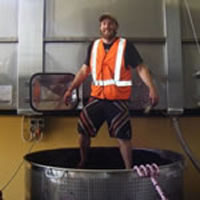 Darren Delmore was raised by restaurateurs in San Luis Obispo, California. After stints in competitive surfing and publishing as an editor at Surfing Magazine, he embarked on an oenological odyssey that steered him through ten wine harvests in California, Oregon and Australia. He worked with Rhone varietals at Bonny Doon Vineyard, punched down Pinot Noir at the Hirsch Vineyard, and blackened his palms at Two Hands in the Barossa Valley of Australia. He also represented Goldeneye Winery in Anderson Valley as a Wine Educator.

Darren's love of Tablas Creek began with the 2002 vintage of Esprit de Beaucastel, and his humble personal collection boasts a consecutive vertical of the flagship blend going back to 2003.

Darren’s written work on wine has been published by Wine Spectator, Vine Times, Anderson Valley Advertiser, and Wine Country this Week. He currently lives in Templeton with his partner Jillian, son Shea, and daughter Canyon. He is the author of two books about his years working in cellars: Slave to the Vine: Confessions of a Vagabond Cellarhand and its follow-up Lucky Country: Confessions of a Vagabond Cellarhand.

Darren writes the On the Road series on the Tablas Creek Blog, recounting his travels around the state and around the country is search of food and wine greatness. Ian grew up a mere 8.6 miles from Tablas Creek Vineyard in the historic township of Roblar (yes it’s a real place). After graduating from Templeton High School his ambition was to move to a place more industrious than the beautiful rolling hills of green that can seem stifling to a teenager, finding himself in Southern California.

After attaining a degree in marketing and pursuing multiple business ventures including developing and growing the business objectives of a non-profit focused on the employment of homeless in Downtown Los Angeles, he listened to the newer, more logical ambition to return to those green hills.

He found himself in Tablas Creek’s tasting room where, after only a year, was fortunate enough to be promoted to the marketing department where his decade of experience could be used to benefit the wine and company he had fallen in love with. In his off time Ian hangs out with his best friend Rasta, surfs and watches Game of Thrones with his mother.

On the blog, Ian contributes a regular Q & A interview series as well as occasional topical posts. 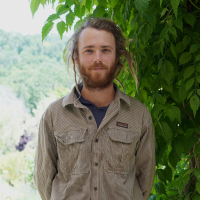 Born in Templeton, CA and raised on the Tablas Creek Estate since 1998, Austin (better known as “Boo”) was practically born in a barrel. The rolling hills of the Adelaide were his stomping grounds until he moved to the North Coast to study Wildlife Sciences and Creative Writing. After being away from his homeland for five years he made the choice to return to assist the family’s business: Bristols Cider.

After deciding that fermentation was his chosen path he was hired as a harvest intern at local winery Linne Calodo. Following that he spent six months in France split between Meursault’s Domaine Matrot and in the Rhone working with the Perrins at Chateau de Beaucastel. Having enough of the French he then spent a vintage working under Helen Masters at Ata Rangi in beautiful Martinborough, New Zealand. After another vintage at Linne Calodo Austin started full time at Tablas Creek in 2019. He can be found mostly in the cellar and occasionally working in the vineyard.

In 2021 Austin came full circle, moving back to the Tablas Creek property his wife Taylor, and later that year they welcomed the third generation of Collins to Tablas Creek, their son Finnegan.

Austin writes the A Vineyard Life series on the Tablas Creek blog. 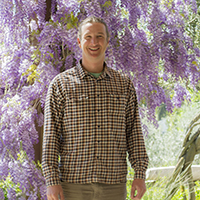 Born and raised in a small beach town by the name of Scituate, MA. 30 miles south of Boston, Jordan graduated from Cal Poly with a degree in Fruit Science. He assisted in the management of the deciduous orchard on campus for over two years until Jordan took his first job in the wine industry with Monterey Pacific Inc., a large vineyard management company in Monterey county, working as a PCA and then as Viticulturist on the famous San Bernabe Ranch and in Haymes Valley. Ever since he began working in agriculture, Jordan dreamed of an opportunity to work on a property such as Tablas Creek. In Febuary of 2016, That dream came true…

Jordan lives in the Adelaida with his wife Molly and their dog Miles Davis. He is an avid fly fisherman and can be found on the rivers of Northern California during his time off chasing steelhead in the winters and rainbow trout in the summers.