Photos of each Rhone grape variety as harvest nears

Harvest is beginning to feel imminent.  We haven't brought in any fruit yet, but we've prepared our log books, washed out all our tanks and equipment, put our harvest cellar team together and we're ready.  We're expecting our first fruit from a couple of the vineyards we use for Patelin later this week.

We don't expect anything off our own property for another week or two, but with the beautiful warm weather we've been having for the last three weeks we've made a lot of progress.  Syrah and Mourvedre are through veraison, Grenache is nearly done, and even Counoise is making good progress.  The whites are also coming along nicely.

I spent an hour prowling the vineyard this morning to get shots of what each grape looks like now.  I'll take them in the order in which we expect them to come into the cellar.  First, Viognier, which was most affected by the April frosts and which is scarcest in the vineyard.  We're hoping for five tons off the roughly five acres we have planted: 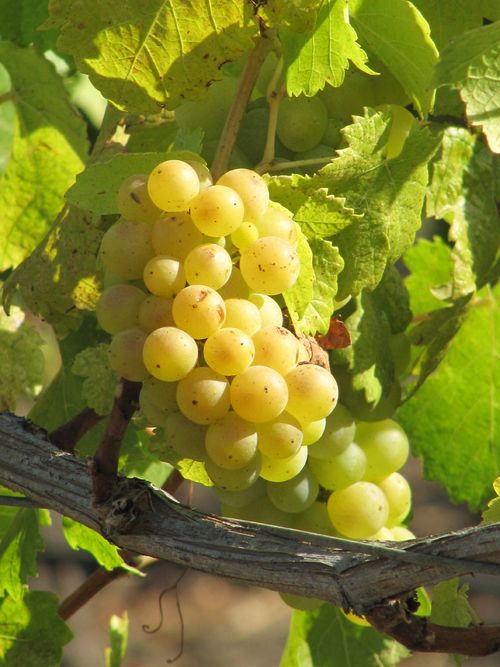 Next, Syrah, which looks great.  Already showing its classic blue-black color, with thick skins and lots of flavor: 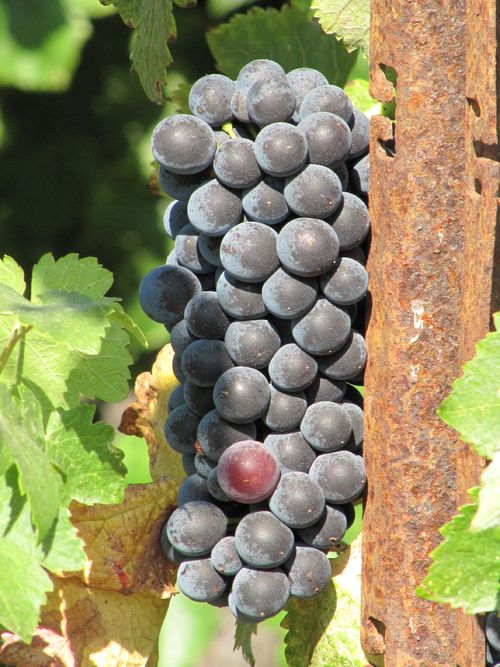 Next will likely be Marsanne, which I'm feeling more positive about after today's explorations.  Yields will be lower than normal, but not as drastically as in the Viognier.  And the vines and clusters look terrific: 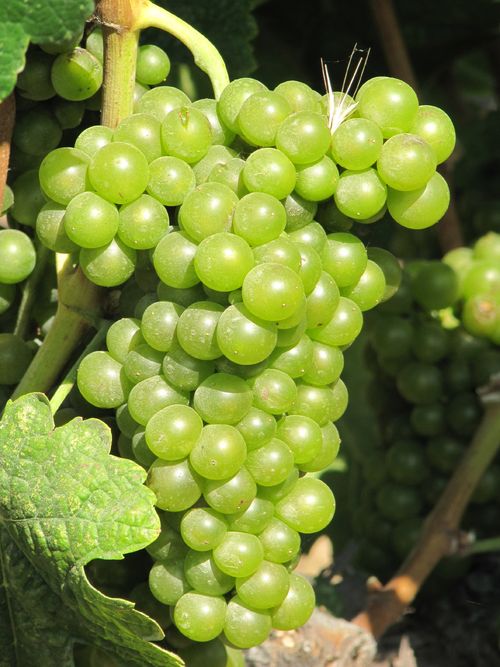 Grenache Blanc will likely come in next.  It was reduced by the frost, but Grenache (both red and white) is sufficiently vigorous that it still set a decent crop.  I may be being optimistic about its timing; it will likely be a later Grenache harvest than we've ever seen before: 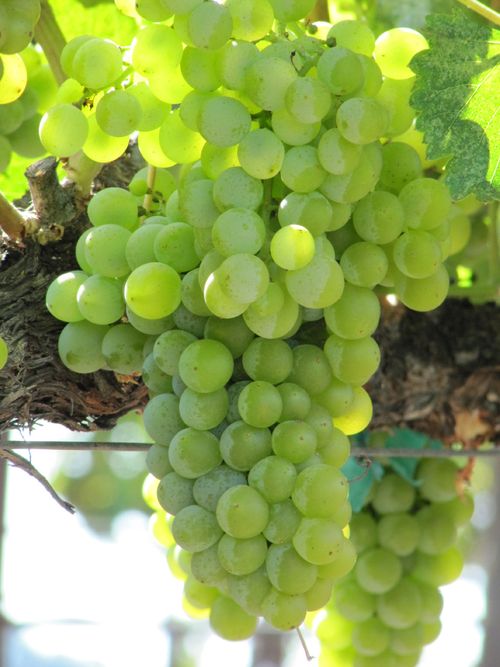 Grenache Noir is typically harvested soon after Grenache Blanc, though this year I'm sure that some Grenache lots won't come in before November.  Different vineyard blocks are at widely different stages, with some looking nearly full red and others still mostly green.  Some Grenache blocks have very little crop, and others look fine.  Our normal practice of harvesting Grenache selectively and carefully will be particularly critical this year.  The cluster below is probably about average for the vineyard, mostly through veraison but still fairly light in color and with some greenish berries mixed in: 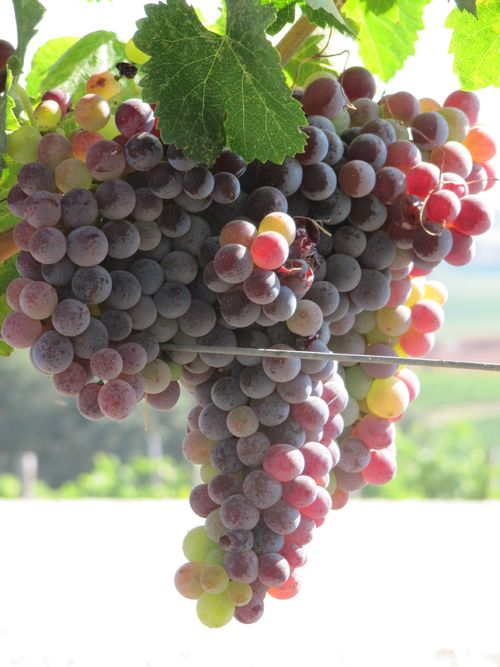 Roussanne, which would normally be very late, seems comparatively more advanced this year.  It came through the frosts just fine and looks to be in exceptional condition; for whatever reason, the typical late-season Roussanne malaise that we're used to seeing hasn't materialized this year.  In fact, I may have misplaced it, as I'm almost certain we'll see our first Roussanne lots before our first Grenache lots.  Below, you can see Roussanne starting to get its typically russet color: 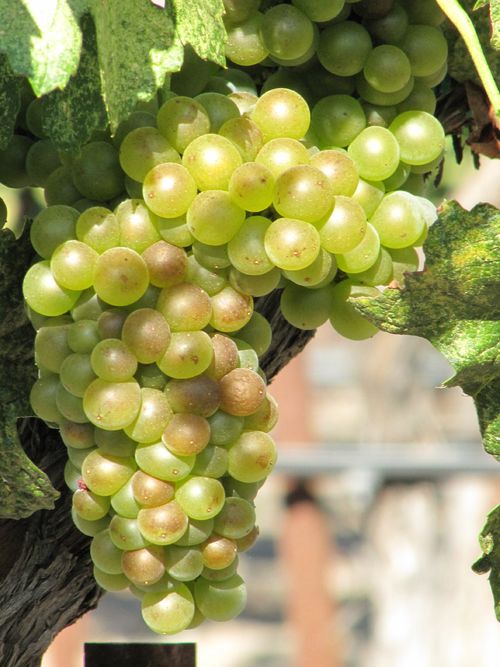 Right around when Roussanne is harvested, we typically bring in Picpoul.  I'd think that Picpoul, which is planted in our coldest pocket, will likely be a little later this year.  Still bright green, it seems a while off yet: 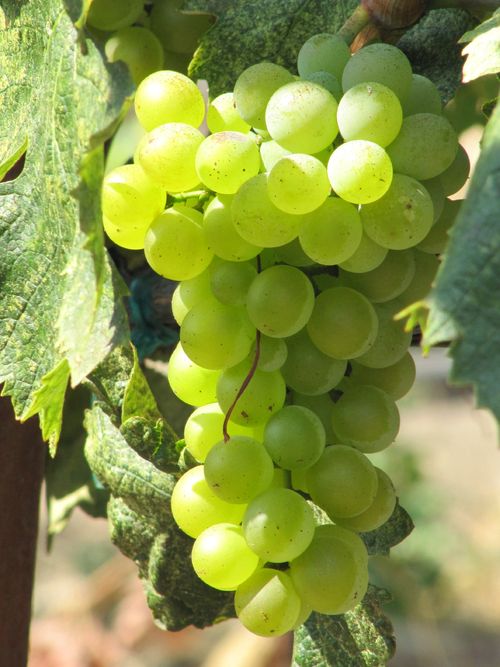 Normally, Mourvedre would be last.  But like Roussanne it was largely unscathed by the frosts, and actually started veraison first of the reds.  It does take a long time between veraison and ripeness, but I still will go out on a limb and say we'll bring some in before we do Counoise, which is still partly green even in the ripest areas.  The Mourvedre looks really strong this year: 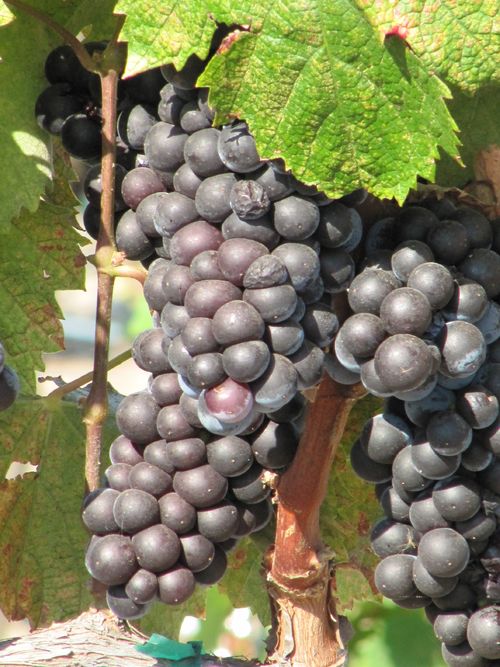 Last is Counoise, which was just starting to sprout at the time of the frosts.  That's not as bad for productivity as if a vine is more advanced (as were, say, Viognier and Grenache) but it does tend to delay ripening significantly.  And Counoise is already late.  I'm hoping we bring it in in October this year, but wouldn't be surprised if it's November.  The cluster below is a little more advanced than what's average in the vineyard, but still shows some green berries mixed among the pink and red: Overall, I'm feeling a little more positive about yields than I was after my last extended trek around the vineyard three weeks ago.  Our two most important varieties (Roussanne and Mourvedre) look good, and most blocks of Syrah look fine.  Grenache and Grenache Blanc will be reduced, probably by half compared to last year, and Marsanne and Counoise are probably similar.  Viognier will have a quarter of last year's crop, if that.  While that all may sound bleak, that's not too bad given that Mourvedre and Roussanne account for nearly half our total planted acreage.  We'll see, soon enough, if I'm right.