Veraison 2017 suggests an early, but likely not record-breaking, harvest

I returned on Wednesday from three weeks away to a significantly changed vineyard landscape. When I left, we were through flowering but many of the grape berries were still pea sized, bright green, and hard. It looked like early summer. Fast forward three weeks and the grapes are much more mature. While almost all the grapes are still green, many varieties are full-sized. The white grapes -- except for Roussanne -- don't look all that different than they will at harvest. And, when I got to the Syrah block, I found veraison.

Veraison marks the point where a grape stops accumulating mass and starts accumulating sugar. At the same time, red grapes start their color change from green, while white grapes take on more of a yellow tint. Both red and white grapes start to soften. [For more about what's happening chemically, check out this veraison post from the archives.] This landmark comes roughly six weeks before the onset of harvest, and gives us our best estimate for when harvest will begin. One of the most advanced Syrah clusters shows the beginnings of this color change: 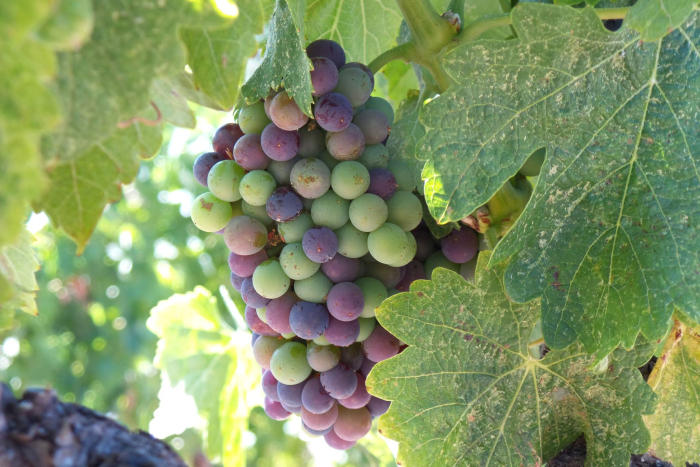 It's important to note that this cluster is exceptional. Even at the top of the hills, most of the Syrah clusters are green. Go even halfway down the hills (where it's cooler, since cold air sinks at night) and there's no color change to be found. And as for the other grapes, only in Mourvedre could I find even a hint of veraison, and that took some searching. The cluster below is about the most advanced I could find: 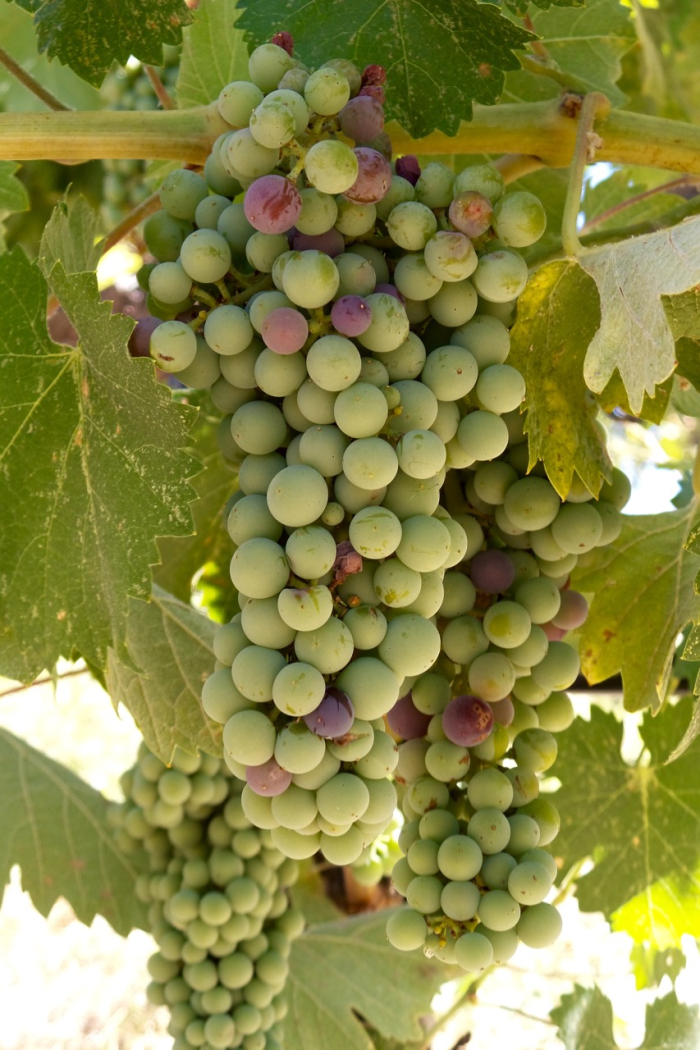 Although it may seem like wineries mark veraison as a moment, it's probably better understood as a continuum, with the percentage of berries that show the telltale signs. By that measurement, I'd say we were 5% through veraison in Syrah, 1% through in Mourvedre, and 0% in Grenache and Counoise. So, we've got a ways to go. But still, when we first note veraison is one of the five major signposts in the vineyard year, each of which helps us know how it compares to other years. Veraison is the third, after bud break and flowering, but before first harvest and last harvest.

While six weeks is a good basic guide for the duration between veraison and harvest, it's not totally constant, and can be influenced by the weather that we get in the interim, as well as by the amount of fruit the vines are carrying.  For example, in 2014 our earliest-ever veraison (noted on July 9th) was mitigated by a very cool August, and we started harvest 45 days later, on August 23rd. By contrast, last year's first veraison was noted on July 13th, and combined with a very warm August to produce our earliest-ever beginning to harvest, just 36 days later. The last ten years are compiled in the chart below, with each year linked to my blog post about that year's veraison:

Using the range of durations between first veraison and first harvest (36 to 49 days) we can have good confidence that we'll begin picking sometime between August 25th and September 7th. If I had to lay bets, I'd guess we start toward the early end of that range, given that it's been a very warm summer so far and we've already made up ground from bud break that was two weeks later than 2016.

What's next for the vineyard? We'll watch the different grapes go through veraison. Syrah and Mourvedre will be followed by Grenache soon, and Counoise a bit later. The white grapes have already started veraison -- though it's not something easily shown in photographs -- with Viognier and Vermentino well underway and the others soon to follow. It's an exciting time, with the view changing practically daily. I'll be posting regular photos of veraison's progress on our Instagram page. In the cellar, we'll be getting the last of the year's bottling done so there's space in barrels and tanks for the coming crush, and starting the process of pulling out and cleaning all the tanks, barrels, and equipment we'll be using once harvest begins.

So while veraison doesn't herald anything immediate, it's still a significant milestone. The timer has been set, and we now know -- roughly -- how much time is on it.