A great shot of ripening Mourvedre 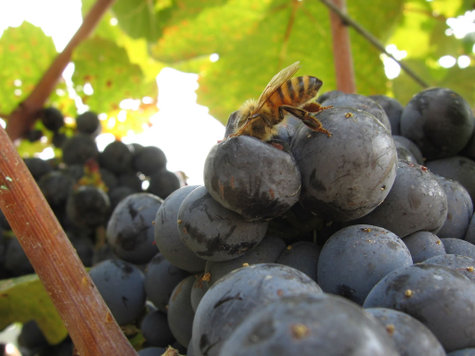 You think these grapes aren't sweet?  Yellowjackets and honeybees have a feast on ripe grapes as harvest approaches (Mourvedre in this photo).  Thanks to Chandler Smiley for the picture.

Harvest 2006 is underway! We began picking this past Thursday (September 14) with Chardonnay grapes for our "Antithesis" Chardonnay. Viognier, traditionally the earliest-ripening Rhone varietal, followed on Friday the 15th. This week, we brought in our first lots of Roussanne, earmarked for our "Bergeron" wine, on September 19, and we expect to start harvesting Syrah, our earliest-ripening red Rhone varietal, at the beginning of next week. The mild weather we’ve had for the past few weeks has slowed ripening, and we can afford to take our time bringing in the grapes, and letting the fruit hang until it’s ready to pick. We’ve seen smaller berries than normal on the clusters we’ve brought in so far, with more concentrated juice – characteristics that other local vineyards are also noticing. Acids, as well, have been healthy, which has been true in the best vintages we've seen recently.  We’re looking forward to another great harvest!

Harvest began about 2 weeks later than normal for us, which was about what we'd been figuring.  After our relatively late spring (we saw flowering about 4 weeks later than usual) our warm summer accelerated the ripening somewhat, but didn't entirely make up for our late start.

If you are interested in reviewing the 2005 Harvest, take a look at the 2005 Tablas Creek Harvest Journal