This week, we've switched our focus to reds and accelerated the pace of harvest with some rain threatening for this weekend.  When all is said and done, we will have harvested over 35 tons this week, including most of the rest of our Syrah, a good chunk more Grenache, our first Mourvedre and Counoise, and even some later-ripening whites: our first Marsanne and Roussanne for our Roussanne "Bergeron" program.  A few photos give you a great sense of what ripe Grenache looks like.  Note the relatively light color, even when ripe, and the fairly large, loose berries of Grenache clusters in a picking bin: 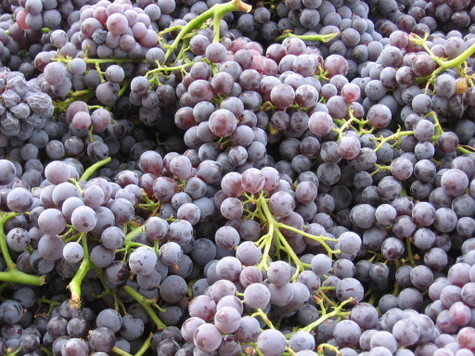 Below, from another angle, you can see the half-ton picking bins we use stacked on the right in the background.  You can also see the somewhat overcast day today. We're forecast for some rain showers tomorrow, which is very early for Paso Robles.  It's not supposed to be damaging (maybe a half-inch at the most) but we always worry that a first rain might usher in a weather pattern where a succession of storms roll in off the Pacific.  It doesn't look like that will be the case this time; the weather is forecast to be warm and dry next week.  Still, it has added some urgency to bring in what's ripe this week. Finally, one more shot, this one in the cellar of Grenache clusters on the sorting table being fed into the destemmer machine.  We destem most of our reds (with the occasional exception of an occasional Mourvedre lot a la Bandol, some Tannat which is unwilling to be destemmed, and our Vin de Paille red) to keep them from accumulating tannins from the stems.  You can see the clusters falling into the destemmer, and the violence of the destemming process. 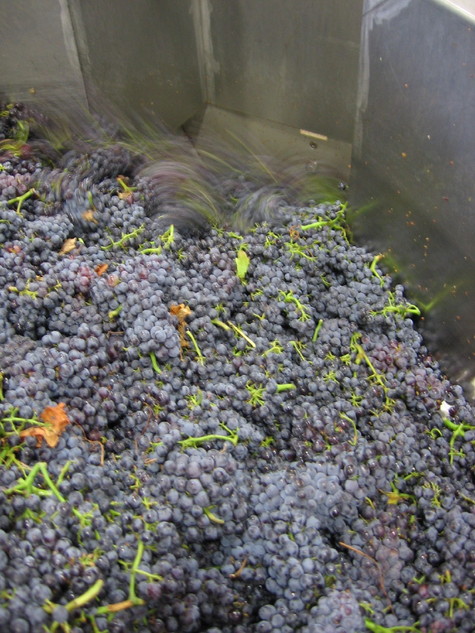 So far, we've harvested just over 100 tons.  Colors and flavors look great, sugars appear to be somewhat lower than normal, and yields range from about average to well below average depending on varietal.

Last week saw continued moderate temperatures, with most days peaking in the lower 80s and nights in the 40s.  This is perfect ripening weather... as long as you're not in a hurry.  The grapes are gradually accumulating sugars, and the cold nights mean that acids are remaining intense.  All this adds up to a week where we harvested very little.  We harvested just two days, and brought in roughly thirteen tons.  Half of this was our first Grenache Blanc of the season, and the rest evenly divided between most of our remaining Viognier and some additional Syrah.

So far for the year, we've harvested about 48 tons.  This puts us behind last year's pace (at the same time last year, we'd harvested 76 tons) but well ahead of 2006, when we didn't begin harvest until September 14th.

I thought it might be interesting to check in on the different red varietals to see what almost-ripe looks like.  I didn't feel the need to repeat the Mourvedre photos I took last week, but visited the blocks of Syrah, Grenache and Counoise.  First, Syrah, ready to pick (most of it has in fact been picked, but this is at the bottom of one of our hills in a comparatively cool spot).  Note the deep blue-black color and the berries starting to deflate: 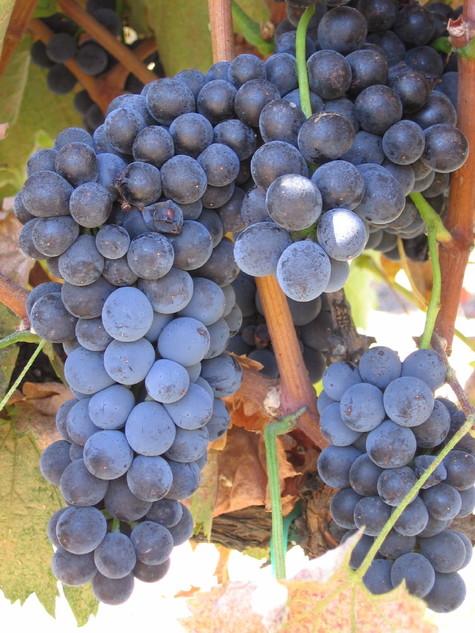 Next on tap will be our Grenache.  We're scheduled to bring in our first picking later this week, from the top of one of the hills.  This photo is from a cluster toward the bottom of the same hill, which we probably won't pick for three weeks at least.  Note Grenache's traditional pink-purple color and relatively generous cluster size: 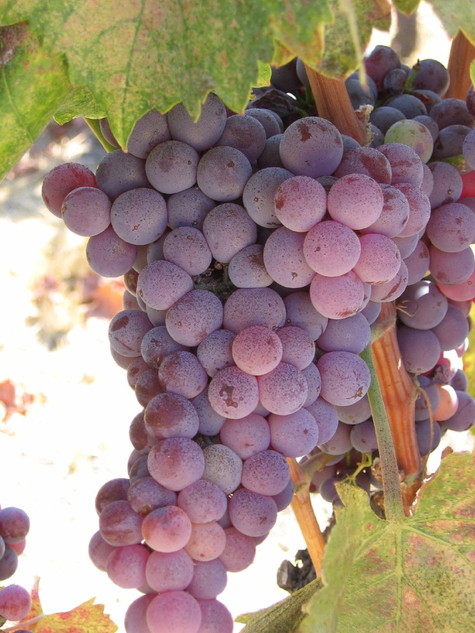 It was challenging to take a representative photo of Counoise, which had clusters already turning to raisins alongside others that were only mid-way through veraison. (If you click through to my post on veraison you'll see that Counoise was also the last to begin to turn color this summer).  The following cluster seemed pretty average, with the majority of the grapes a pretty blue-purple but with a few pinkish grapes too: 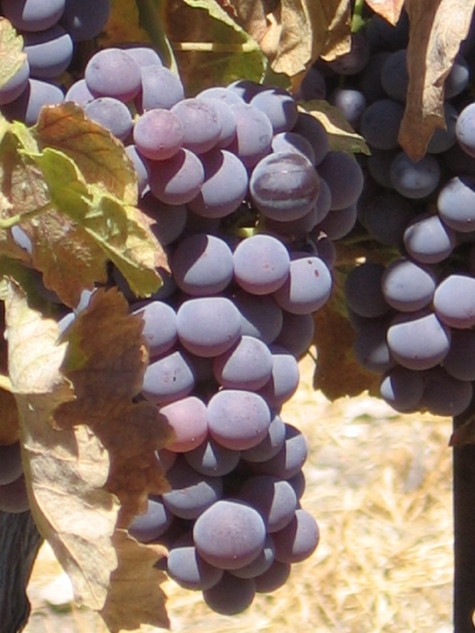 As we get deeper into harvest, we're getting more concerned about our yields.  Many other wineries nearby are reporting yields even smaller than the tiny yields of 2007.  The drastically lower yeilds seem to be concentrated in vineyards growing Zinfandel and Cabernet (both of which were afflicted by shatter this year) but even other Rhone producers are starting to sound alarmed at the size of their crops.  We still think we'll come in ahead of 2007's quantity numbers, but I have a lot less confidence saying that than I did two weeks ago.

Some nice photos of ripening Mourvèdre

We're not harvesting today, but I took a walk through the vineyard to see the state of things.  We'll be bringing in more Syrah, our Marsanne, and perhaps starting the Grenache and Roussanne next week, but there is a lot more of the vineyard that is still weeks away from ripeness.  One section that is looking good, but not tasting ripe (yet) is the Mourvèdre from the hill behind the winery which we call Mount Mourvèdre.  I managed to get a few nice photos of ripening clusters on the vines: 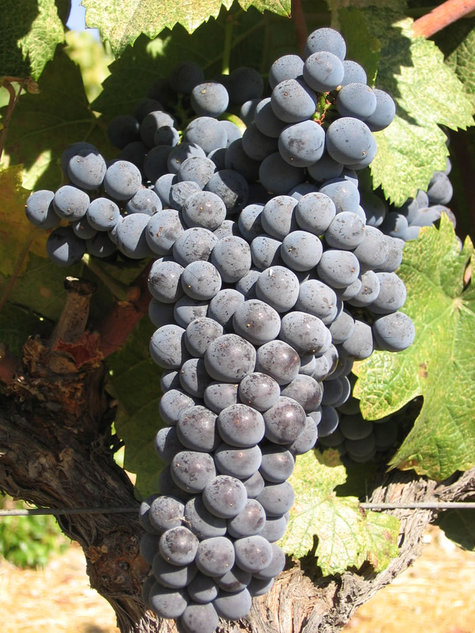 Last harvest, I ran into Cris Cherry of Villa Creek Cellars and asked him how his harvest was going.  He replied that his Mourvèdre vines had lost all their leaves, so he was beginning to think about picking them.  He was only half-joking.  Mourvedre vines always look awful by the time we pick, with any remaining leaves mostly brown.  I like this second shot for the way that it shows the Mourvèdre leaves, already turning brown despite needing another month at least of ripening: 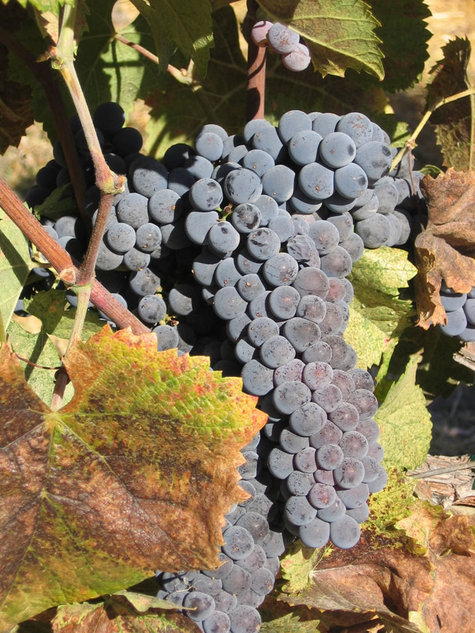 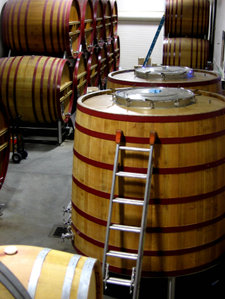 After a hot stretch in late August and the first few days of September caused several varietals to race toward ripeness simultaneously, last week saw more moderate temperatures and a much slower harvest pace than we'd feared.  We actually had a few foggy mornings out at the vineyard (unusual for September) and didn't harvest at all on Monday, September 8th.  Over the last four days of last week, we brought in just under 20 tons of fruit, including more Viognier (we're now about 70% done with our Viognier harvest) as well as the first twelve tons of Syrah.  This Syrah is fermenting in our new upright, 1500-gallon oak fermenters (foreground at right, with stacked foudres looking deceptively small behind and to the left).

In addition to the Syrah and Viognier, we also harvested our entire small-lot productions of Vermentino and Chardonnay.  Both were affected by the frosts this spring and came in light in yield, even more so than in 2007.  Our Chardonnay yielded just under two tons of fruit off of about two acres.  Our Vermentino yielded 2.75 tons, 30% less than in 2007.  This will impact our wine club shipments for next year, as neither variety will produce enough wine to include in a shipment.  Viognier yields, though, are up.  We're already 33% above last year's totals and not yet completed harvesting.  We have tentative plans to again make a varietal Viognier.

Overall, we're still of the belief that overall yields will be between the relatively high yields of 2006 and the extremely low yields of 2007.  We're estimating about 15,000 cases overall, maybe a little more.

This week, we expect to be harvesting Grenache Blanc, our first Roussanne (for our "Bergeron" program), and more Viognier and Syrah, though nothing too urgently.  The weather is forecast to remain moderate through the end of the week, and then to heat up again starting over the weekend.

Finally, I'll leave you with one more photo from last week: blooming sunflowers from the field surrounding our straw-bale barn, which we planted earlier this summer to attract beneficial insects. 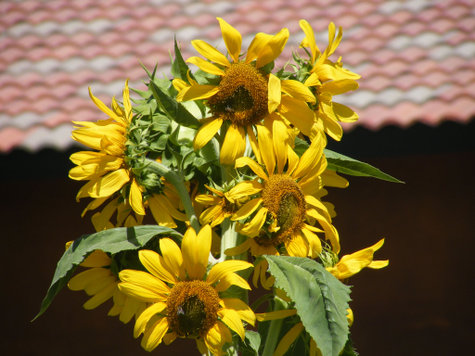 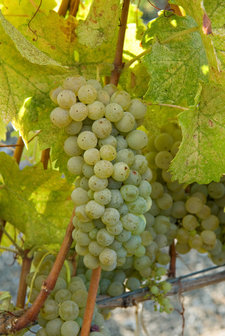 Well, we've finally begun this year's harvest.  Yesterday and today, we've been harvesting our Viognier, which as usual is our first varietal in the cellar.  2008's harvest started about a week later than the 2007 harvest did, consistent with a slightly later veraison and overall moderate temperatures in August.  Compared to our 14-year history, a start in the first week of September is just about average.

Quality looks very good.  Our yields look to be higher than the historically low yields of 2007, but still slightly lower than average.

It looks like we'll continue to see some of the early varietals coming in next week, including Chardonnay and maybe our first Syrah.  The comparatively warm weather (highs in the upper 90s) of the past few days will moderate next week but remain seasonable.  Highs are forecast to be in the upper-80s with lows in the upper 40s.

A ripe Viognier cluster is pictured above, just before harvest.

We're seeing veraison in most of our red varieties.  Our timing is nearly identical to last year, when I wrote my post on Veraison on July 27th.  Veraison (sometimes anglicized to verasion and pronounced vuh-rey-zhun) is the time of year when berries stop increasing in size and refocus on ripening.  It's not unusual to see multiple varietals going through veraison simultaneously, but I was happy to get photos this morning all four of our Rhone red varieties at a point where you can see the differences in how they ripen.  First, Syrah, as usual the first to show veraison and the earliest to ripen, likely in early September: 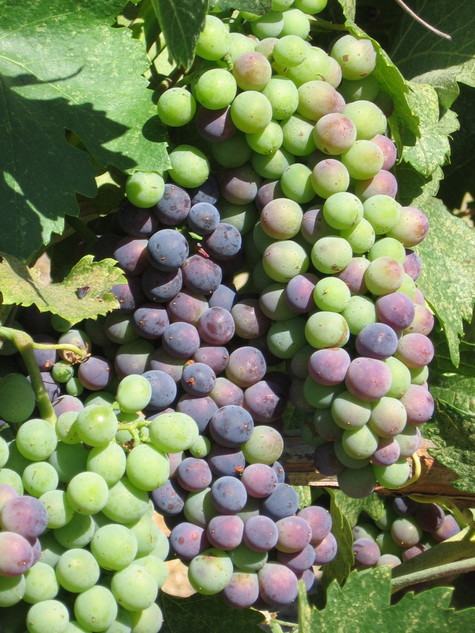 Next, Grenache, which appears to be ripening a little later than normal. Note how far behind the Syrah it is: 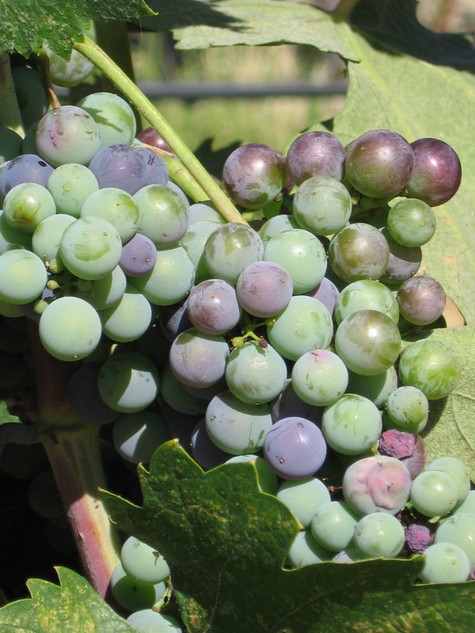 Mourvedre is at about the same stage as Grenache, but we still expect to harvest it last, in mid- to late-October: Finally, Counoise is barely showing any color change at all.  I had to search most of the Counoise block to find this cluster with a few berries just starting to turn color: 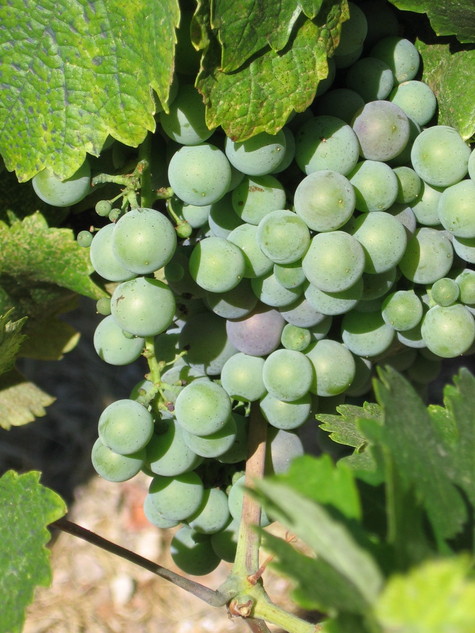 It's worth noting that the sky and the air are clearer than they've been in months, since before the fires in Monterey County began sending ash and smoke southward toward us six weeks ago.  A photo of Roussanne growing against the sky shows the typical Paso Robles deep blue skies (Contrast this with photos of the smoky weather from late June): 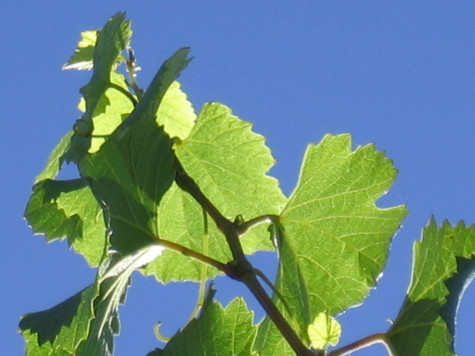