A Family (Winemakers) Trip to the Golden Gate

As we loaded up nine cases of wine into the Subaru on a sunny Sunday morning, I immediately got the drift that two days of representing TCV at Family Winemakers of California’s San Francisco tasting wasn’t going to be a relaxing, casual affair. Pouring 108 bottles in approximately two four-hour tastings equals over a case an hour, and (assuming one ounce pours) over five tastes per minute. There’s no way any winery would go through that much wine at a trade event where 300 other wineries were also pouring, would they? 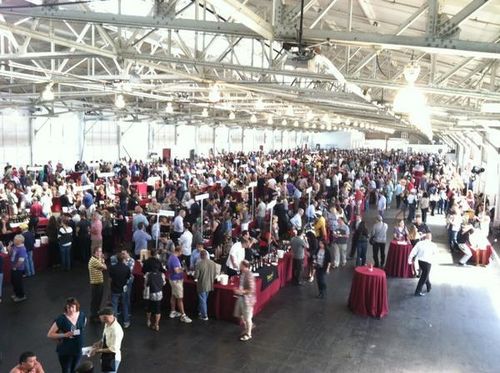 We made speedy, all-wheel-drive time into the city, unloading the wines at a bustling Fort Mason Center, parking, and inhaling sandwiches from Greens Restaurant as the whites chilled. It was an absolutely beautiful day to be pouring wine on a pier in San Francisco. We poured a pretty serious lineup, everything that we make that sees any distribution at all for the mostly wine-buying trade and media attendees of this long running event:

I hadn’t been to a Family Winemakers event since 2008 in Pasadena, so I was wondering how the organization had been faring in recent years. There are so many trade and consumer tastings these days, what niche did Family Winemakers continue to fill? As a wine buyer for a restaurant, I recall the abundance of high end California wines on hand at these tastings, and the opportunity to actually talk to winery owners and winemakers in a more spacious atmosphere. I also dug walking away knowing which wineries in California were family owned and/or independent. This year’s event filled up slowly but surely on the first day, with sommeliers and buyers from a great array of restaurants, bistros and wine shops turning up to taste what’s new. Before we knew it we were pouring full throttle to a mass of both trade and consumers alike. The disadvantage of pouring so many wines is that it takes serious tasters quite a while to get through your lineup. The advantage: you sure look busy.

The action didn’t wind down until three hours in when Jason urged me to go taste around the room. My throat was parched from shouting what Counoise was over the thunder of tasters, so I went straight to Ramey Wine Cellars, who, along with Kistler, is the master of California Chardonnay in my opinion. The trio behind the table looked as exhausted from the day’s pouring as I felt so I didn’t take up much more of their time. I was just happy to know that their 2009 Hyde Vineyard Chardonnay was as good as their 2008.

That night Jason and I cabbed it to Park Tavern in North Beach for what would be a fabulous meal with our distributor's new key accounts specialist for the Bay Area. Until recently a sommelier at a top Napa restaurant, she was happily already a fan of our wines and psyched to meet us and taste what was new. Over a discussion of the glories of Mourvedre-based rose and a bottle of 2011 Chateau Pradeaux, Jason told the tale of how his father and the Perrin family ultimately picked Paso Robles in 1989 to found Tablas Creek. For me, listening to limestone-enlivened wine tales is to me what hearing the latest on a cinematic celebrity’s pregnancy or Justin Bieber’s eating disorder is to the rest of America. We moved on to the bright, honeyed 2010 Esprit de Beaucastel Blanc when the main courses hit the table, which collectively paired with their choices of Black Cod and my highly-recommended bone-in pork chop plate with bacon confit that should’ve simply been called "the pacemaker". "You win," the server quietly said to me when he placed my selection before me.

The following morning I chose to take in the sights of the city. Jason (who had a board meeting) had warned me that the Tenderloin, a few steps the wrong way from our excellent hotel, used to be a really terrifying place. But there was a Blue Bottle Coffee location ten minutes away according to my iPhone, so I took a brisk morning stroll down Taylor into an area that I’d later find out was graced by a bustling methadone clinic. I about to abort the mission when I saw the most-welcome sign for Jessie street and power walked down a mere half a block to find a line full of black-rimmed spectacle-adorned hipsters awaiting their morning brew. What a difference a hundred yards makes!

I met up with Jason at 1:30 for the final trade tasting, and before long we were swarming with fans and tasters. The Vermentino was a hit. The Patelin de Tablas Blanc was showing extremely well and if you’re in the Bay Area, you’re surely going to see this killer blend on by the glass lists. A lot of people had never tried Mourvedre on its own, and our 2010 was much-requested. By 5 pm, an hour before the cutoff, my voice felt like Janis Joplin’s after a two-hour whiskey-fueled set. Come closing time, all but one of those nine cases of Tablas Creek were gone, and once outside en route to the getaway ride, the winds whipping off the San Francisco bay were full of mercy. 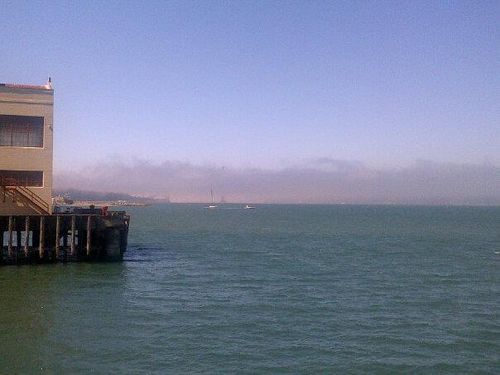