Thirsty for a bit of history: The Wine of the Popes

[Editor's Note: With this blog, we're launching a the new blog series "Stories from the Tasting Room", written by the talented Evelyne Fodor. Evelyne was born and raised in Lyon, France, holds a PhD in French and Francophone Studies from UCLA, and still teaches for UCLA online. She has been one the leaders in the Tablas Creek tasting room since 2014.]

The other day a young couple stopped at the winery for a tasting.  Timothy and Cassandra, as they introduced themselves, were from Silver Lake, a hidden Los Angeles neighborhood that attracts creative people and foodies. My guests fell in both categories. “Timothy is a TV writer and I am a private chef” Cassandra told me.  Timothy had an unusual request. “I am reading this book about a troubled gentleman, confined in a hotel, who found solace in drinking the “Wine of the Pope.” The allusion to the New York Times bestseller, A Gentleman in Moscow, did not escape me. The main character, Count Roskov, a wine connoisseur, was a big fan of Châteauneuf-du-Pape wines.  “How is Tablas Creek related to Châteauneuf-du-Pape?” he asked.   Of all the things that makes our story so compelling, our connection with an ancient village in Southern Rhône is the one that excites me.  The name transports you not only to another time and place, it also evokes a turbulent time in the Catholic Church history, the birth a wine dynasty family, an iconic bottle, and the inspiration for our flagship wine Esprit de Tablas. 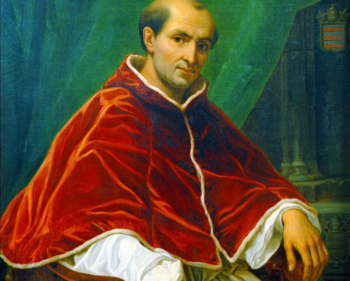 Châteauneuf-du-Pape means “Pope’s new castle,” I told Timothy. In the 14th century, I continued, just before the Great Schism the newly elected Pope was a Frenchman from Bordeaux by the name of Clément V (pictured left).  As historians told us, Pope Clément chose to not move to Rome for security reasons. Instead he brought the Papal court to the walled city of Avignon, at the time a property of the Roman Church.  Clément V, it is also said, was an avid wine drinker who preferred to stay close to his estate which he personally managed.  The estate was a few kilometers north of Avignon in an ancient village known for its soil, Châteauneuf-Calcernier, named after a nearby limestone quarry.

I started the tasting with our 2016 Grenache Blanc, a perfect wine for a day like today, when Timothy interrupted me. “It’s a lovely wine, great acidity! Tell me more about the Castle.” Clearly Timothy was enjoying the unexpected history tasting so I continued. The next Pope, by the name of Jean XXII, also French, also a wine lover, built a home among the vineyards of Châteauneuf-Calcernier, as a summer residence to escape the heat of Avignon.  Then six successive French Popes kept their residence in Avignon, spending time in the vineyards of Pope Clément, expanding the home started by Jean XXII.  The Papacy remained in Avignon until the last French Pope, Gregory XI, decided to return to Rome. It came to a bad end for the last Pope, but the legend of the “Vin du Pape”, as it became known, had begun. 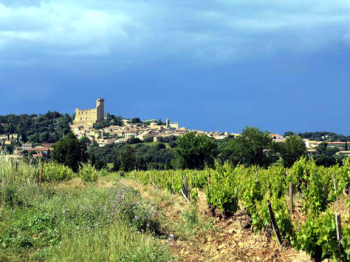 I was now pouring the 2016 Cotes de Tablas, boasting the characteristics of my favorite grape, Grenache, when Timothy signaled again, he was ready for a bit more of history. “So how did the Beaucastel family became involved with the Wine Pope?” It came later I answered. The Popes had already returned to Rome when Pierre de Beaucastel, a Huguenot living in a village nearby, bought a barn with a plot of land. In those days, if a Protestant agreed to convert to Catholicism, in return King Louis XIV would give him the right to collect taxes from the local people.  It is with this money that Pierre built his house.  In recognition of his status and conversion to Catholicism after the revocation of the Edict de Nantes, he was appointed “Captain of the town” by the King and became known as Noble Pierre de Beaucastel.  The Beaucastel family went on to become one of the most prestigious families in Châteauneuf-du-Pape region, and their estate has now been owned and run by the Perrin family for five generations.

“There is a scene in A Gentleman in Moscow, where Count Rosko is in the cellar of the Metropol Hotel where thousands of bottles of wines had their labels removed” Timothy said, “but Count Rosko was able to single out a bottle of Châteauneuf-du-Pape. How was that possible?” Clearly, Timothy had never seen a bottle of Châteauneuf-du-Pape. "If you remember the scene," I told him, "Count Rosko was lingering his fingers on the bottles." In our seating room we have a picture of a vintage bottle of Château de Beaucastel. "Here it is," I told Timothy. You can see and feel the inscription "Châteauneuf-du-Pape contrôlé" embossed in Gothic letters. The Coat of Arms symbolizes a Papal tiara placed above the keys of St. Peter, or as Francois Perrin, our French partner from Beaucastel once told me “the keys to Paradise”.

When the tasting was completed, Timothy joined our VINsider Collector’s Edition, “to get as many older Esprit de Beaucastel and Esprit de Tablas vintages I can put my hands on.” And with that, Cassandra had one final question: “What should I pair the wine with?” Timothy winked at me. We both knew the answer. “A bouillabaisse, bien sûr”, as per Count Roskov’s recommendation.