Sustainability Matters: We ditched the plastic water bottle. And so should you.

[Editor's Note: With this blog, we're launching a the new blog series "Sustainability Matters", written by Leslie Castillo. In addition to her responsibilities as a team lead in the tasting room, she is our point person on a major waste-reduction initiative we began at Tablas Creek late last year.]

Have you been to our tasting room? If you have, you’ve probably seen and enjoyed the complimentary cool, fresh water we provide in reusable stainless steel canteens. Our guests are welcome to enjoy this water while they are visiting; we ask that they return the canteens when they're done. And most people do. We often receive comments from our first-time visitors expressing what a genius idea it is to provide water in reusable canteens instead of single-use plastic bottles, and that they wish more other places adopted it. To us, finding alternatives to plastic is more common sense than genius. 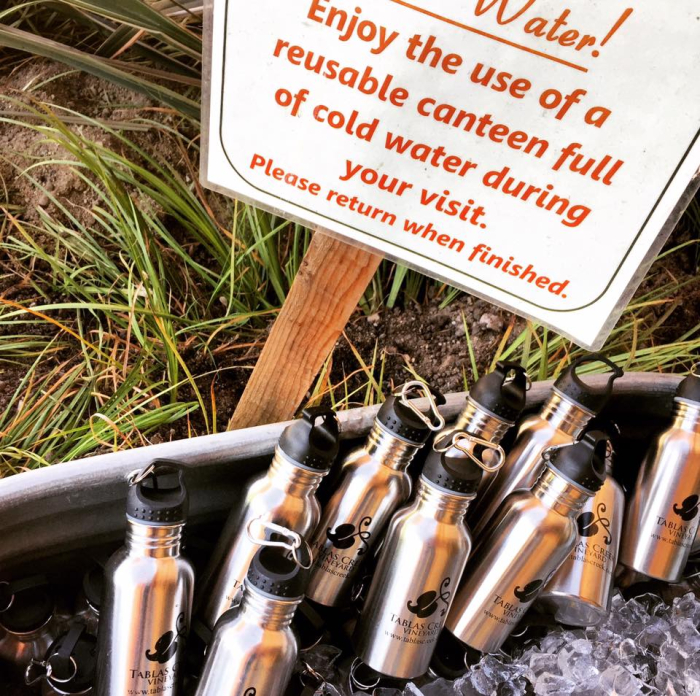 Ever since we opened our doors to the public in 2002 we have made sure water is provided to our guests. That's an essential accommodation for any business serving wine and a common courtesy for a winery like us who wants to get our guests out to see how grapes are grown in an often warm, dry climate. In our first few years, we hosted tastings in a smaller tasting room at the western edge of our winery, and used 5-gallon reusable water jugs. But as our traffic increased, and we got more demand for water to take out on tours, we switched to a more convenient alternative: plastic bottles with our logo on the label. From June 2007 to June of 2011 we purchased one pallet of single-use water bottles roughly every five and a half weeks. Each pallet had 84 cases, and each case had 24 bottles, which meant we were going through some 19,000 bottles per year.

That summer, our General Manager Jason Haas had the common-sense idea to replace the single-use plastic bottles to the reusable stainless steel canteens we offer now. I asked him why, and he said "it always made me a little queasy seeing the pallets of water arrive, and knowing that we had a hand in creating demand for all this plastic. It seemed like there had to be a better way. When I came up with the idea of the stainless steel canteens, I kicked myself for not having thought of it earlier." This decision turned out to be good for our bottom line as well as for the environment. We lose between 5% and 7% of the canteens. They cost roughly four times what a plastic water bottles cost. The cost of the water filtration station and the labor to sterilize and refill the empty canteens each morning have been modest. So, we figure we've reduced the cost of providing water to our guests by some 75%. And the reduction in the amount of plastic waste we were producing has been dramatic. That was important even when the plastic that we were collecting was being recycled. With recent changes to the international plastic recycling supply chain it's even more so.

You may assume that plastics thrown into your recycling bin end up reprocessed into a new material. New research (and changes to international trade) suggest that's largely not the case. In fact, worldwide, 91% of plastics are not recycled. For the last 30 years, most of the plastic waste the US and many other countries produced was exported to China to be recycled. But as of January of 2018 China stopped importing all plastic waste from residential collection. This means China went from being the main world’s plastic waste recycler to only buying plastics that are 99.5% pure, this means 99.5% clean, free of contaminants like left over food, liquid, grease, etc. As a consequence, bales of plastic waste began to pile up around the world, from Japan to the UK, Germany, Australia, and yes, the United States. 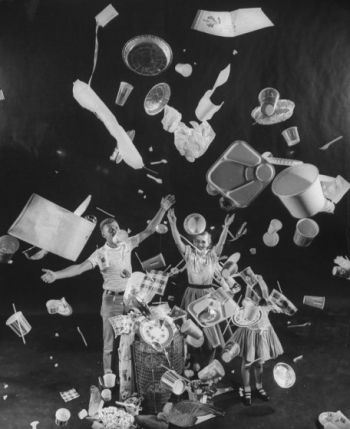 It's not like things are likely to get better soon, either. Most consumer plastics today have no market value in the recycling industry, and virgin plastic is cheaper than its recycled version. Single-use plastic is everywhere, from the grocery store to the shopping mall to the fast-food restaurant. And yet, we don't have to go back that far in history to find a culture that didn't embrace a throw-away lifestyle. If we look back at the World War II era, thriftiness was encouraged. People collected metal to be melted into bullets. But the years following the end of WWII were an era of economic growth and prosperity in the US, and the focus on consumer products was ease of use. A sign when the society began to switch from a thrift based model to a throw-away model is an article published in August 1955 by LIFE Magazine that includes a remarkable image by Peter Stackpole of Getty Images (right) of a couple and their child throwing disposable plates and other food ware up in the air. The title of the article is “Celebrating Throw-away Living”.

It's easy to understand why plastic became popular. It is easy to mold into different textures and shapes, can be flexible like a plastic bag or rigid like the keyboard I’m using to type this blog post, it is impermeable so it can serve as a barrier for oxygen and bacteria, and it is cheap to produce. Plastic is also extremely durable: so durable that it lasts essentially forever. It seems crazy that a material that lasts forever is the underpinning of single-use products that are meant to be thrown away!

Plastic does not biodegrade. It fragments into smaller pieces instead called microplastics, fragments 5mm or smaller. These fragments are now permeating our oceans to the point that they can reasonably be called the smog of the sea. These small plastic particles are ingested by ocean animals, from the smallest fish in the sea to huge filter-feeding whales. This is an environmental crisis. It's also a social justice crisis, and I’ll explain why.

According to 5 Gyres, a California-based organization that fights global plastic pollution in our oceans, in the US an average of 3 million water bottles are used per hour, a number that has continued to grow despite well-publicized city bans of single-serve bottled water and the faltering recycling system. Since the January 2018 China plastic ban, cities like Memphis, Tennessee and Deltona, Florida have stopped their recycling programs. Earlier this year, RePlanet, the biggest recycling center in California, went out of business, shutting down all of its 284 centers because there is too much plastic waste and not nearly enough infrastructure to reprocess plastic into new materials. The accumulating plastic waste is either going into landfills or oceans, or being incinerated, adding to climate change worries and adding air pollution disproportionately in majority-Latino and black communities. 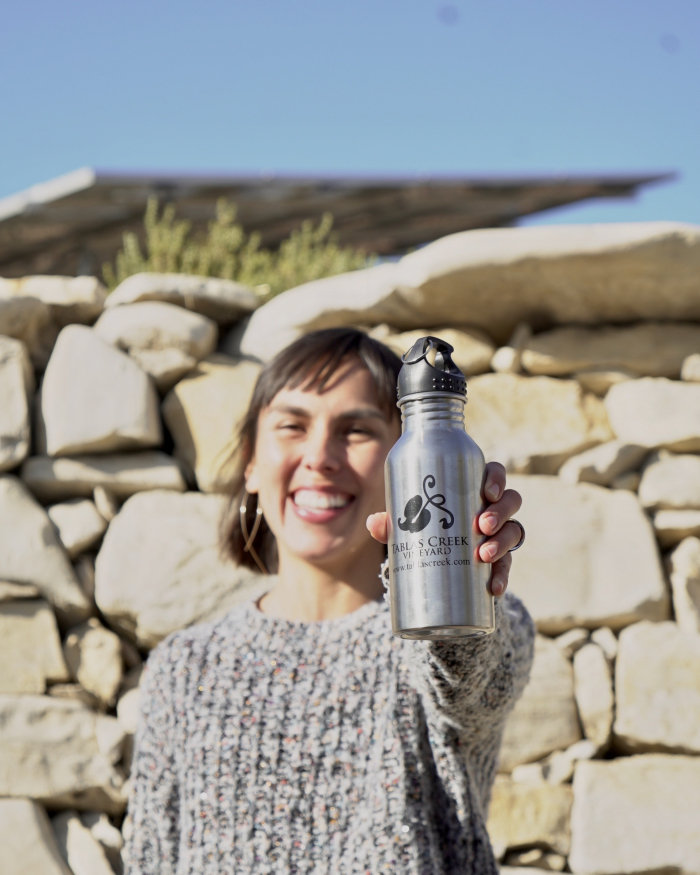 So, what to do? First, recognize the scale of the problem. Plastic bottles are the number two in the top five single-serve disposable items. Maybe switching to reusable steel canteens instead of the single-use plastic bottle at a single winery in California seems insignificant, but over the eight and a half years since we made the switch, we've saved the production of more than 161,000 plastic bottles. Every reduction of 1000 bottles reduces demand by 40 gallons of oil and eliminates the release of 142 pounds of CO2 into the atmosphere. And that's just the production. The reprocessing or destruction of these bottles requires additional resources and releases additional pollutants and greenhouse gases into the atmosphere. We are just one of more than seven million businesses in California. Imagine if one in ten found a similar area where they could make a change that reduced their waste and helped their bottom line. If more and more people set aside a little bit of convenience to begin practicing more sustainable ways of water consumption, perhaps sooner than later our culture will begin to see throw-away as what used to be the norm. Think of other norms that have changed surprisingly rapidly, like smoking in restaurants, bars, and airplanes.

I’m curious to know if any of you readers who live in areas where recycling has been suspended. How has this impacted your community? Have you made any changes in the way you consume? And, most importantly, have you come up with any great ideas that deserve to be more widely adopted?